Orochi is an elemental hydra-like demon boss from the Ōkami series of action adventure games.

The Orochi is an eight-headed serpent demon of massive size. On Orochi's back is a shrine surrounded by a garden with a giant temple bell hanging in it on a large stone pedestal. Underneath the pedestal is a mass of writhing tails, entwined, and at the sides of the mass, sprout eight necks the size of tree trunks, and on the end of each neck is a head, wearing a samurai helmet with thick armor plating and armed with a gaping mouth covered in vicious teeth, and on the outside is lined with barbs pointing outward.

Each head of Orochi has an element which is (clockwise) Fire, Earth, Poison, Light, Lightning, Water, Wind and Darkness. The samurai helmet of each head bears the emblem of its element and the element's kanji: Fire has the emblem of a raging flame; Earth has a large mountain emblem on its helmet; Poison has a purple skull and crossbones; Light has a circle, with shining rays projecting from it; Lightning has a lightning bolt, with the kanji on the middle of the bolt; Water has the emblem of a water drop; Wind's has the symbol of a whirlwind, which is a circle and two spirals sprouting from it; and Darkness has its emblem of a crescent moon in complete black.

At the base of the eight necks is a shrine on a stone pedestal, with surrounding lanterns and plants, resembling a zen garden. In the shrine hangs a gigantic bell, which generates an impenetrable barrier that shields True Orochi from any damage. The shrine and the bell is covered in gold plates, signifying the status and power of True Orochi. It is also covered in golden armor plating (instead of being bare with only the helmet like Orochi), and its helmet is also covered in gold.

Orochi presumably originated from the Ark of Yamato. More than 200 years prior to the events of Ōkami, it attacked the Celestial Plain (causing all the Celestials to flee in the Ark of Yamato with Waka, which would inadvertently lead to their demise during the Ark of Yamato genocide). Following the advice of Waka, Amaterasu dragged Orochi down to the mortal plain, waiting for a person of a legendary bloodline who could defeat Orochi. Orochi settled in the Moon Cave and terrorized the inhabitants of Kamiki Village, selecting a young maiden as a sacrifice every year. Amaterasu was wrongly believed to be Orochi's familiar and given the name Shiranui. Eventually the person of the legendary bloodline, Nagi, was born. Although he antagonized Amaterasu at first, he teamed up with her to defeat Orochi after his beloved, Nami, was chosen to be the sacrifice, as the legend says. Shiranui died during the battle (although it was later revealed by Amaterasu after her journey through the Spirit Gate that many details of the legend were untrue and Shiranui actually died of wounds inflicted by Lechku & Nechku during the battle atop Wawku Shrine; during the fight with Orochi, the goddess was already on the verge of death). 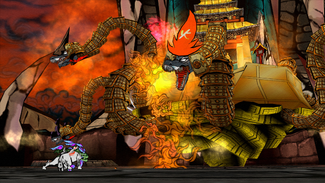 A century later, Orochi returned after Nagi's descendant, Susano, accidentally removed the sword Tsukuyomi that was binding it. However, Orochi was not at his full power, and needed a blood pact with Susano in order regain his former strength. He also consumed Tsukuyomi to prevent anyone from sealing him again. Although Orochi tried to convince Susano to submit to him, Susano's courage and determination shone through, and he and Amaterasu defeated the beast. This only began the next stage of his plan, however, since Orochi released several other demons that also originated on the Ark of Yamato into Nippon. Orochi's corpse released the reborn form of Tsukuyomi, the Divine Instrument Tsumugari, after his death. Orochi's true form would later be encountered through the Spirit Gate and on the Ark of Yamato.

Some time prior to Amaterasu's arrival at the Northern Lands, Lika, a girl of the Oina tribe who possessed great spiritual power suddenly vanished from the village of Wep'keer, just as a fierce blizzard hit the entire region. In a quest to search for her, Amaterasu and Issun entered Ponc'tan, at which one of the residents, Miya, stated that she saw Lika crossing the Spirit Gate deep within the dark forest of Yoshpet. When the Sun Goddess and her companion crossed the ancient artifact and entered True Orochi's lair a century past, many details of the legend of Orochi unfolded and was proven to be false. One such detail was the reason behind Lika's disappearance, as well as the truth concerning Shiranui's death.

After Akuro revealed himself and his aims to Chibiterasu and Kurow some time after the defeat of King Fury, he headed back 9 months into the past (conciding with the events of Ōkami) to reach the moment of Orochi's defeat, in order to bathe in the blood of the demonic serpent. Fortunately, Kurow prevented this from happening, only for Akuro to move further into the past, to the event of True Orochi's defeat. Kurow attempted to prevent the demonic being from getting to Orochi's corpse, but a falling boulder was also heading for him, and in a desperate move, Chibiterasu knocked the Moon Tribe boy out of harm's way, at the cost of Akuro making contact with Orochi's blood, greatly amplifying his powers.

Orochi as it appears in Ōkamiden.
Add a photo to this gallery
Retrieved from "https://capcom.fandom.com/wiki/Orochi?oldid=136928"
Community content is available under CC-BY-SA unless otherwise noted.