Optic Sunflower (Optic Sunfloward in Japan) is a character from the Mega Man series of action platformer games. He is a Maverick and boss in Mega Man X8.

He and his army of Mavericks have sabotaged the Helios program in Troia Base. Optic Sunflower's main attack is by warping about, rearranging the blocks in the room while doing so, making doubles of himself, and shooting the Shining Ray. In Overdrive, he'll shout "Earth Crush" and sends out a massive beam. But the weapons from Bamboo Pandamonium do well against him.

It seems that of all the X8 Mavericks, Optic Sunflower had the most unstable mind. He spoke as if delusional, and seemed to enjoy playing with the minds of others. When confronted by Zero, however, Sunflower tells him "I know all about you, Zero. You were meant to be the ultimate destroyer. It's too bad you chose not to follow our master's wishes." Whether he was referring to Sigma or Dr. Wily is unknown. 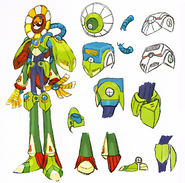 Concept art
Add a photo to this gallery
Retrieved from "https://capcom.fandom.com/wiki/Optic_Sunflower?oldid=131294"
Community content is available under CC-BY-SA unless otherwise noted.