Capcom Database
Register
Don't have an account?
Sign In
Advertisement
in: Articles with incomplete sections, Games, Onimusha Games,
and 8 more

Onimusha Soul is a browser game developed by Capcom, running on the Unity 3D engine, that was released June 28, 2012 only in Japan and is available both on online browsers and mobile phones.[1][2] A spin-off title in the Onimusha series, the game was later released for the PlayStation 3, also Japan-exclusive, in 2014.[3]

Following the same story as the Onimusha series, the game envisions the Japanese Warring States where players can role play as one of Oni, Human, and Genma to lead heroes or swordsmen into the field of battle.

Set in ancient Japan, Onimusha Soul lets players take on a feudal lord or swordsman, train commanders and manage their nation in the direction of growth and prosperity.

In feudal Japan, the country is divided into 47 prefectures where players can collaborate with others or fight them to the point where they control over the rest of prefectures.

Classic characters from the Onimusha series are featured, including Nobunaga, Guildenstern, Marcellus, Magoichi, Akane Yagyū, Roberto, Kaede, Oyu and Samanosuke. The browser game is a "Sengoku simulation RPG" and features many cameos in the form of "cards" from other Capcom characters (mostly female), as listed below. 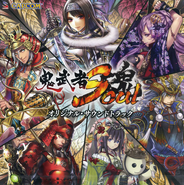