Olivia is a character from the 3D action comedy beat em' up game God Hand where she is the female protagonist and supporting ally to the main character Gene.

Nineteen years old, this beauty is a descendant of a family that protected the Godhands for centuries, until demons hunting for the arms wiped out most of the family. As the sole survivor, she fled with one of the Godhands, allowing fate to carry her to a small town where she crosses paths with Gene and entrusts the Godhand to him. Now twenty-three, she acts as his director, accompanying him as they hunt down demons wherever she senses them.

Olivia always convince Gene to go after the demons with her kindy voice, but she can be quite bossy, pulling a tomahawk out of nowhere and threatening him. 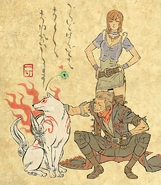 Official art of Olivia and Gene with Amaterasu from Ōkami.
Add a photo to this gallery
Retrieved from "https://capcom.fandom.com/wiki/Olivia?oldid=132869"
Community content is available under CC-BY-SA unless otherwise noted.