Oichi is the younger sister of Nobunaga Oda and the wife of Nagamasa Azai. She is depicted as a tragic, beautiful woman with supernatural powers who is very melancholic, weak-willed and depressed, always thinking that everything is her fault. She was at first sent by her brother to marry Nagamasa and spy on him. However, she genuinely fell in love with him and was torn between betraying her brother and her lover.

Oichi's story in Sengoku BASARA 2 starts with her and Nagamasa fighting against the Oda army. After witnessing her husband's death at the of hands of Nobunaga and then being forced to fight on in Nobunaga's name, she slowly starts to lose her sanity. In the end, she succumbs to her own dark powers, which leads her to kill Nobunaga's retainers (Nōhime and Ranmaru) and eventually Nobunaga himself. After killing her brother in Honnō-ji, Oichi regains her sanity for a little while, then breaks down in tears at her atrocity to her family and clan. The temple collapses and she is presumed dead afterwards.

Oichi inexplicably returns in Samurai Heroes, having lost her memories after suppressing the pain of witnessing Nagamasa's death and being forced to do cruelties under Nobunaga's name in the past. Rather than bearing the Azai crest, she now uses the Oda crest.

In her Red route, Oichi joins Ieyasu - Lord Happy - because he's kind to her and wants to always be there for her. She repeatedly joins him on the battlefield, despite his protests, and him asking her to stay behind. She chooses to kill Mitsunari - Lord Grumpy - to save him from the "hole in his heart".

In her Blue route, she joins Mitsunari and becomes a pawn for in Yoshitsugu's plans to bring misfortune in the world. In this path, her dark side is fostered and fed on the souls of those she is made to fight. Once Oichi defeats Ieyasu at Sekigahara, she turns against Yoshitsugu, bringing darkness to the world.

In her Green route, she follows a voice, leading to a battle with either Tenkai or Hideaki. Fighting Tenkai makes him admit that he lured Oichi to him, with the desire to resurrect Nobunaga using the woman's blood. This encounter leads to her Purple Route, where Oichi rushes to get to Azuchi Castle before Tenkai can fully resurrect her brother. Unfortunately, she is too late, and Tenkai is found dead by Nobunaga's hands. The two siblings fight, and at her victory, Oichi drags her brother back down into the depths of hell.

Oichi is prone to calling out the names of those long dead, including her brother Nobunaga, Nōhime, and Ranmaru. If the player fights her as Tsuruhime, she is likely to mistake the young girl as Ranmaru, due to their shared weapon. Strangely, the times she utters Nagamasa's names are in her few moments of clarity.

Before Sengoku BASARA 2, Oichi wields two naginata bonded and connected by a cord, which she can separate and chainlink to its bar. Beginning in Sengoku BASARA: Samurai Heroes, she fights only with her Dark Hands but they are implied to be controlling her.

Her naginata attacks all have a decent coverage of the area around her, making them good against groups. Meanwhile, her Dark Hands attacks not only deal good damage, but also stop enemies (through sinking them to the ground or grabbing them). Additionally, her Dark Hands also gain some bonuses as her health gets lower (best effect occurs when Oichi is in critical health). However, as the Dark Hands skills are all Dark-Elemental, this special feature is somewhat "limited" (as Oichi gain health back, reducing the bonus) but can be a safety measure of sorts (when used while health is in red zone). Lastly, her BASARA attack is also quite powerful.

In Samurai Heroes, most of Oichi's skills are performed independent of Oichi's current actions. This allows her to do almost anything (move, do normal attacks) while her dark hands attack enemies. This can be used to interrupt enemies when they are attacking Oichi.

Oichi's "joke" weapon in her early appearances is a giant voodoo doll with a nail stuck through its head.

Oichi (お市?), or Oichi-no-kata, (1547–1583) was the younger sister of Oda Nobunaga; and she was the sister-in-law of Nōhime. Oichi was equally renowned for her beauty and her resolve. She was descended from the Taira and Fujiwara clans.

Following Nobunaga's conquest of Mino in 1567, in an effort to cement an alliance between Nobunaga and rival warlord Azai Nagamasa, Nobunaga arranged for Oichi, then twenty years old, to marry Nagamasa. Their marriage was through political means, ensuring an alliance between the Oda and the Azai clans. She bore Nagamasa one son (Manjumaru) and three daughters -- Yodo-dono, Ohatsu and Oeyo.

In the summer of 1570, Nagamasa betrayed his alliance with Nobunaga and went to war with him on behalf of the Asakura family. A story relates that Oichi sent her brother a sack of beans tied at both ends, ostensibly as a good-luck charm but in reality a warning that he was about to be attacked from both front and rear by the Asakura and Azai clans. According to the story, Nobunaga understood the message and retreated from his brother-in-law's assault in time.

The fighting continued for three years until the Asakura and other anti-Oda forces were destroyed or weakened. Oichi remained with her husband at Odani Castle throughout the conflict, even after Toyotomi Hideyoshi, a trusted vassal of Nobunaga at the time, began laying siege to the castle. When Odani was surrounded, Nobunaga requested that his sister be returned to him before the final attack. Nagamasa agreed, sending out Oichi and her three daughters. Nagamasa had no hope of winning, and chose to commit seppuku.

Oichi and her daughters remained in the Oda family's care for the next decade. After Nobunaga was assassinated in 1582, his sons and vassals broke into two major factions, led by two of Nobunaga's favored generals, Katsuie and Hideyoshi. Nobunaga's third son, Nobutaka, belonged to the former group, and arranged for his aunt Oichi to marry Katsuie in order to ensure his loyalty to the Oda clan. But in 1583, Katsuie was defeated by Hideyoshi in the Battle of Shizugatake, forcing him to retreat to his home at Kitanosho Castle. As Hideyoshi's army lay siege to the castle, Katsuie implored Oichi to flee with her daughters and seek Hideyoshi's protection. Oichi refused, insisting on dying with her husband after their daughters were sent away. The couple reportedly died in the castle's flames. 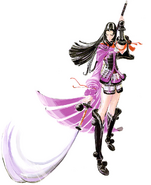 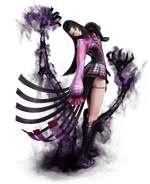 Oichi as she appears in Sengoku BASARA: Samurai Heroes

Sengoku Basara 4 Alternate Costume
Add a photo to this gallery
Retrieved from "https://capcom.fandom.com/wiki/Oichi?oldid=137878"
Community content is available under CC-BY-SA unless otherwise noted.