The Nyx are enemies from the Resident Evil series. It was an experimental biological weapon stored in Raccoon City in the game Resident Evil Outbreak: File 2.

In late 1998, at the height of the T-Virus outbreak in Raccoon City, Nyx was stolen by USS Commander Juan Rodriguez, likely at the request of researcher Linda Washington. A UBCS team was dispatched to track it down, led by Arnold St. Peter.

Depending on the actions of the player, Nyx may be either extracted successfully or dropped from the helicopter onto the highway overpass by a Stinger missile fired against Rodriguez' chopper by an Umbrella executive in an attempt to destroy both him and the evidence of B.O.W. research (Nyx itself). When the UBCS team goes to investigate, they are quickly killed, their bodies absorbed into the creature's biomass. Nyx also manages to absorb a Tyrant-R into itself.

Nyx is one of Umbrella's most horrifying creations. It is a jelly-like organism, that is capable of grabbing and incorporating players into its body, killing them by infesting their bodies with the T-Virus at a madly high infection rate. Its attacks include throwing pieces of its body, attacking with a massive arm almost entirely comprised of the aforementioned U.B.C.S. unit, and more conventional physical attacks.

Nyx's weaknesses are very little, but it can be destroyed either by barrages of high-caliber weapons, or if the absorbed Tyrant-R's demolition charges haven't been activated, Nyx can be destroyed by activating them. With the Tyrant-R's body so near its core, the blast nearly kills it and renders it extremely vulnerable. Another way of killing it is to use the nearby rocket launcher to fire at its core and finish it permanently.

The only true part of Nyx is its' large "eye" on its' body, which is its weak spot. If the bomb is already destroyed, and the rocket launcher used already, then the only attack left is to shoot (or hit) it untill it kneels over, weakend. Attacking the eye will cause the creature to groan largely, taking away its health. 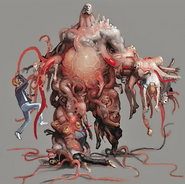 Beta artwork from Resident Evil Outbreak: File 2.
Add a photo to this gallery
Retrieved from "https://capcom.fandom.com/wiki/Nyx?oldid=139945"
Community content is available under CC-BY-SA unless otherwise noted.