Nosferatu, also known as Alexander Ashford, is a boss monster that appears in Resident Evil CODE: Veronica, Resident Evil Survivor 2 - CODE: Veronica and Resident Evil: The Darkside Chronicles. He is the father of Alexia and Alfred and the son of Edward Ashford who was experimented and injected with a Veronica Virus by his own daughter, Alexia.

Nosferatu is a bald, pale green humanoid creature wearing a leather mask with metallic clasps covering his bloody eye sockets. His movements are restricted by an article of clothing similar to a leather skirt reinforced with metal clasps around his legs. Even though his hands are tied behind his back with leather-and-metal bindings, he can still strike out with three appendages similar to spider legs that protrude from his back. His body produces a gas that upon contact with oxygen turns into a deadly fog. Nosferatu's weak point is his heart, which is exposed on his chest.

The creature Nosferatu began life as the father of the Ashford twins, Alexander Ashford. In 1981, as an experiment his daughter Alexia injected him with the T-Veronica virus, and locked him in the basement of their Antarctic research facility when the experiment was deemed a failure. He spent the following seventeen years slowly growing insane, due to the virus and the solitude of the sealed room. After a disturbance in the base, he escaped in late 1998, only to be killed by Claire Redfield, who put him out of his misery by sniping his heart with the rifle that originally belonged to his son.

In Darkside Chronicles, during the climax battle between Alexia and the Redfield siblings as she is about to mutate to her second form. Alexander appears on a video screen where he comes clean regarding about Alexia's prodigy and her insanity for injecting herself with the Veronica Virus on her body after both Alfred and Alexia had found out that they were created by him. He created an anti-weapon called the Linear Launcher as it means to kill his own daughter whether from Umbrella's side or not and he pleads them to help her.

The name Nosferatu comes from the Lithuanian word for "immortal", and it was given to him by the workers in the Antarctic facility that heard his bone-chilling cries. 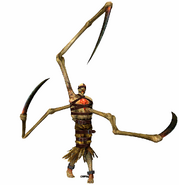 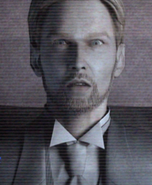 Alexander Ashford
Add a photo to this gallery
Retrieved from "https://capcom.fandom.com/wiki/Nosferatu?oldid=138666"
Community content is available under CC-BY-SA unless otherwise noted.