Nicholai Ginovaef is a character from the Resident Evil series of survival horror games.

A former member of Spetsnaz prior to the collapse of the Soviet Union, Nicholai has been involved in various classified missions and special operations on behalf of the Umbrella Corporation. He not only leads the B-Team of the Umbrella Biohazard Countermeasure Service's Delta Platoon, but is also secretly a member of Umbrella's internal espionage organization, Monitor, where he is known by the code name "Silver Fox". Nicholai answers directly to Colonel Sergei Vladimir, commander of the U.B.C.S. and leader of Monitor. He also has a rivalry with HUNK, a prominent member of the Umbrella Special Forces.

Unlike the other U.B.C.S. members, who are mostly third-world mercenaries or convicted war criminals, Nicholai is a career Umbrella agent. Nicholai meets Jill Valentine as one of the few surviving operatives from Delta Platoon, along with Carlos Oliveira and Mikhail Victor. Unknown to his U.B.C.S. comrades, Nicholai is one of the "Supervisors", Umbrella agents stationed throughout the city assigned to monitor the T-virus outbreak, as well as to gather combat data on the various monsters as the U.B.C.S. soldiers encounter them. However, Umbrella's monsters proved to be even more effective than the company anticipated, and the U.B.C.S. teams were utterly wiped out, stranding Nicholai and the other Supervisors within the city limits.

An exceptionally ruthless and crafty individual, Nicholai realized that if all the other Supervisors were to die, he would have a monopoly on the combat data, giving him the ability to bargain for a higher price from Umbrella. Nicholai spends much of his time covertly hunting down the other Supervisors and executing them. Jill Valentine, in her explorations of Raccoon City, often unknowingly encounters his handiwork. Jill eventually learns Nicholai's true identity and confronts him about it. Nicholai does not gloat about his deception. Nicholai's ultimate fate in Resident Evil 3: Nemesis varies depending on which route the player takes. He can be killed by the Nemesis, killed by the player, or escape successfully.

Resident Evil Survivor features a document authored by Nicholai dated with an entry credited to him dated after the events of Resident Evil 3. However, this is likely a translation error, since the file is different in the original Japanese version and the Chinese localization for PC. The same entry of the document was actually authored by the "Umbrella B.O.W. R&D Team" and not by Nicholai, as seen in the English localization. 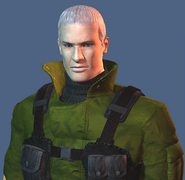 Resident Evil Outbreak
Add a photo to this gallery
Retrieved from "https://capcom.fandom.com/wiki/Nikolai_Zinoviev?oldid=135457"
Community content is available under CC-BY-SA unless otherwise noted.