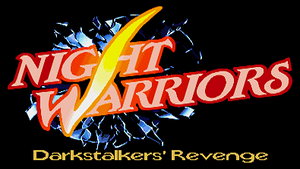 Night Warriors was ported exclusively for the Sega Saturn home console in 1996, receiving a generally very positive critical reception, especially for its smooth and detailed animation. The game was also included in the Darkstalkers series compilation release Vampire: Darkstalkers Collection in 2005 and was remastered as part of Darkstalkers Resurrection in 2013.

A 2D competitive fighting game, Night Warriors features several changes to the gameplay system of its predecessor, Darkstalkers: The Night Warriors. One of these changes is an introduction of the chain combos. Players can also choose between a "normal" gameplay style or one that offers auto-blocking.

The game also introduces two new playable characters, Donovan Baine and Hsien-Ko,[1] who are out to hunt the other Darkstalkers in the game (hence the Japanese title, Vampire Hunter). In addition, the two bosses from the first game, Huitzil and Pyron, are now playable characters as well.

Pyron invades Earth to add to his collection of planets that he has devoured. The world's most fearsome monsters are the last defense of mankind. Two darkstalker hunters make their presence known and join in the fray. Donovan Baine and Hsien-Ko are "Dark Hunters" who are out to hunt the other Darkstalkers in the game (hence the Japanese title, Vampire Hunter).

The announcement that a Saturn port of Night Warriors: Darkstalkers' Revenge would be released in December 1995 in Japan, while the PlayStation version of the original Darkstalkers still had no confirmed release date, was met with outrage from PlayStation owners.[2] In explanation for the decision, Capcom representatives said in December 1995: "Consider Vampire Hunter as an upgrade of Darkstalkers. (...) The original Darkstalkers used 128MB for all characters, Vampire Hunter uses 256MB in total. That means an average of 500 extra patterns for all characters. (...) Originally the plan was to release PlayStation Darkstalkers in April but it fell behind, hence the decision to take the later Vampire Hunter straight to Saturn. We get the user response to release our software as soon as possible, which we have to do, and we also have Darkstalkers 3 lined up for the arcade."[3]

The game was originally released for the Japanese arcades in March 1995. A Sega Saturn port was released in Japan and North America on February 22, 1996. A PAL conversion of the Saturn port was finished by May 1996 but the European publisher, Virgin Interactive, opted not to release it until November 1996.[4] This version features an "Appendix Mode" that allows players to customize the backgrounds, the opponents' colors and background music between the regular ones and the ones used in the original Darkstalkers.

Several licensed tie-ins were released for the game in Japan, including:

Vampire Hunter: The Animated Series is a 1997-1998 four-part anime OAV miniseries based on the game and made by Madhouse Studios in association with DR Movie. It was released in the West as Night Warriors: Darkstalkers' Revenge. In Japan, the anime itself was given a two-volume novelization written by Makoto Takeuchi.

A reviewer for Next Generation stated that the graphics are "dramatically" improved over the original Darkstalkers, and that the new special moves system adds a strategic element to the game and saves it from being a mere remake of the original. He concluded that "Night Warriors doesn't break new ground, but the bottom line here is that it is done really well".[6]

The Sega Saturn version of Night Warriors: Darkstalkers' Revenge received positive reviews upon its release. VideoGames called the game "a must-purchase for fight fans and Saturn owners".[7] Game Informer described it as a "truly unique fighter" because of its gameplay system, regarded as an unusual for a 2D fighting game, adding that the game is "definitely amazing to look at" due of its "outstanding" and "truly spectacular" animation.[8] GameFan called it "one of Capcom's best fighters to date", with "quite possibly the best animation on a home fighting game yet" (rivaled only by Samurai Shodown III for the Neo Geo CD), describing it as "an amazing translation, and a big improvement over X-Men" and "a Saturn exclusive you must own."[9] The four reviewers of Electronic Gaming Monthly described it as "a near-perfect translation" and praised the variety of characters, though they felt that the game was rather old compared to other recent arcade fighting games from Capcom.[10] Rad Automatic of Sega Saturn Magazine similarly called it "practically arcade perfect" and praised the variety of characters while questioning if it was good as Capcom's other recent Saturn fighting games.[11] A Next Generation critic remarked that the game successfully differentiates itself from other Capcom 2D fighters with its macabre character designs and their appropriate move sets. He added, "What's fun about Night Warriors is the fact that anything can happen. The success of the series lies in the fact that each character has a host of twisted maneuvers that take the action to all sorts of extremes, and yet that wonderful chess-like strategy element is still perfectly applicable to the game."[12] Writing in GamePro, Major Mike stated that the game is not as deep as the recent Street Fighter Alpha, but that it makes up for this with its outstanding visual spectacles and easy controls. He also rated the Saturn conversion of the graphics, audio, and visuals as flawless, remarking that "If Capcom keeps this up, arcades may well go out of business."[13] Daniel Jevons of Maximum likewise said that with the full animation option on, "you've got a frame for frame, pixel for pixel, carbon copy of the coin-op, right down to Victor's rippling muscles and the reflections of light on Phobos's armour". He praised the game's imaginative characters, perfect balance, innovative special moves system, and huge number of techniques, and summarized it as a happy medium between the precision and depth of Street Fighter Alpha and the flash and accessibility of X-Men: Children of the Atom.[14]

In 2010, Robert Workman ranked it as the fifth best 2-D fighting game ever made, "thanks to its gorgeous animation, fun traditional 2-D gameplay and ridiculously cool character line-up."[15] In a retrospective review, Jon Thompson of allgame called it "of the finest fighting games available at home".[16] However, ScrewAttack's Arcade Recall criticized Night Warriors for having few changes and additions as compared to the original Darkstalkers.[17] Rich Knight and Gus Turner of Complex included it on their list of 25 best 2D fighting games of all time in 2013.[18]

ASCII Guidebook
Add a photo to this gallery