Nick Ramos is a character from the Dead Rising series of survival horror games. He is the main protagonist of Dead Rising 3.

Nick is a mechanic who works for Wrench O' Rama in the fictional city of Los Perdidos. He was an orphan and has no recollection of his early childhood years. He has a mysterious, unknown past. One of the few things he remembers was that he always had a tattoo of the number 12 on the right side of his neck.

He, along with other survivors, try to escape the city due to military plans to bomb it. He travels with his boss Rhonda and Dick throughout the city and combine their efforts to escape Los Perdidos within the six day time limit, before the bomb is set to go off.

Nick is much more youthful than any other Dead Rising protagonist so far, which allows Nick to grow more as the story develops. In the beginning stages of the outbreak, Nick comes off as a naive and somewhat cowardly young man who has difficulties formulating plans. However, his intentions are always good, he always puts people's thoughts and needs before his own, and he has excellent mechanical skills. Nick begins to develop a sense of purpose as he fights for survival during his time spent in Los Perdidos. Unlike previous protagonists, Nick has the ability to make combo weapons on the spot without the use of a workbench.

Nick is one of Carlito Keyes' orphans from the Santa Cabeza outbreak, known as "number 12", and his blood contains the cure for zombie infection. This makes him a very significant individual, and possibly the most influential protaganist in the series. He has a romantic interest in Annie, and at the end of the game, the two begin a relationship. 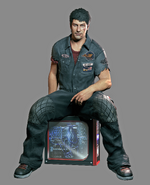 Dead Rising 3 DLC costumes.
Add a photo to this gallery
Retrieved from "https://capcom.fandom.com/wiki/Nick_Ramos?oldid=141364"
Community content is available under CC-BY-SA unless otherwise noted.