Capcom Database
Register
Don't have an account?
Sign In
Advertisement
in: Articles with insufficient citation, Characters, Devil May Cry Characters,
and 7 more

Nelo Angelo is a character from the Devil May Cry series of 3D action games. He is an alternate form of Vergil, the older twin brother of main character Dante, and appears first in the original Devil May Cry as one of the recurring bosses. Nelo, also known as the "Black Angel", is known in the demon world for fighting evenly and with honor against his opponents, despite his demonic status.

is a demon clad in black armor that features several spikes, horns and blue lines that traverse several sections of his costume. He wields a large, black sword, larger than himself, that bears similar features to his armor and is able to summon 'phantom swords', blue blades that appear from thin-air, hover around him and attack according to his will.

After the events of Devil May Cry 3, Vergil wakes up in the "Room of Fallen Ones", still wounded from his earlier battle with his twin brother Dante. Suddenly three glowing orbs approach, Vergil recognizes the orbs as those belonging to the demon emperor Mundus. Smiling and remarking that "If [his] father did it, [he] should be able to do it too", Vergil prepares himself as he run towards the orbs, with the intent to attack Mundus.

Though the battle between Vergil and Mundus was never shown, the former loses (most likely due to being still too wounded) in the fight, and as a result, Mundus creates a demonic armor known as "Nelo Angelo" for Vergil, who would be controlled by Mundus under this form. Also known as the "Black Angel", Vergil (as Nelo) would become known in the demon world for fighting evenly and with honor against his opponents, despite serving someone as dishonorable as Mundus.

Vergil, as Nelo Angelo, is unrecognizable to Dante. He first appears to Dante as a reflection in the bedroom's mirror, from which he emerges and challenges Dante to a duel in the castle garden. They fight, and Nelo manages to pin Dante to a wall. However, Dante's amulet slips out just as Nelo attempts to deliver the killing stroke, and the sight of it awakens Vergil's memories, causing Nelo pain and forcing him to flee. He returns to challenge Dante in the garden near the Colosseum, but is defeated and again forced to flee.

Nelo Angelo finally returns one last time in a hall in the warped castle, where Dante remark on his honorable personality and questions why such a person would serve Mundus, Nelo then shows his true face, but even that isn't enough to make Dante recognize his brother, as it has dramatically changed, causing him to show indifference. He challenges Dante one last time, and though he has been granted with new powers, Dante defeats him and he screams in pain as he disappears in a torrent of blue flames, leaving his half of the amulet. By looking at the amulet, Dante has a flashback and realizes that Nelo Angelo is Vergil.

Nelo Angelo is playable in Devil May Cry 3: Special Edition (in gameplay only, he has no part in the game's story). He starts off as "Corrupted Vergil", where Vergil has a grayish colored face with lines running down it, red eyes, and a purple outfit much similar to Sparda.

While Nelo Angelo doesn't appear in Devil May Cry 4, the Bianco Angelo enemies are stated to be created from fragments of the "Dark Angel" (referring to Nelo Angelo).

After being corrupted by Mundus, Vergil receives new enhancements to his original powers, though his techniques have less diversity than before. In addition to his vast supernatural strength, he can now fire concentrated demonic energies from his fists (though he can still use Summoned Swords), and he wields a strange black zweihänder with ease. Nelo Angelo is capable of using his own, much stronger, versions of some of Dante's attacks, making him a force to be reckoned with in Devil May Cry. However, he cannot use his Summoned Swords until his final battle with Dante. Apparently Nelo Angelo also uses electric gauntlets and greaves. This can be seen in the cutscene after his first fight with Dante.

Nelo Angelo appeared as an Rival Unit in Project X Zone 2, Vergil also appeared in the game (as a pair unit with Dante); the two existing as separate entities as Vergil is time-displaced from the past prior Devil May Cry 3 whilst Nelo Angelo exists as his present timeline incarnation. 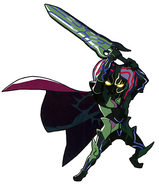