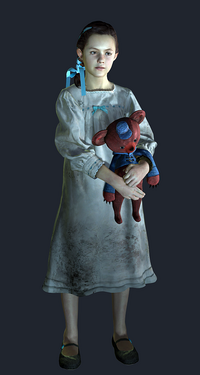 Natalia Korda is a character from the Resident Evil survival horror game series. She makes her debut in Resident Evil: Revelations 2.

In 2004, Korda lived with her family in the floating city of Terragrigia. Due to the bioterrorism attack by Il Veltro, her family was killed and she was left an orphan. She was saved by members of TerraSave including Neil Fisher, who gave her a red teddy bear "Lottie." Her experience gravely traumatized her and robbed her of the ability to feel fear.

She was carefully questioned by TerraSave about the incident. There was one answer in particular that was surprising. In regards to the ultraviolet radiation used to destroy the city, she described it as "pretty." The interviewers were surprised that she could find beauty despite being surrounded by death as her home sank to the bottom of the sea. She lived in TerraSave's headquarters for several years since.

In 2011, Korda was chosen by Fisher to be included as the ninth person on a candidate list for an experiment by Alex Wesker to identify a mentally strong "vessel" resistant to emotional trauma which she could transfer her consciousness into. Korda was abducted from TerraSave's headquarters and brought to Zabytij Island along with several of the organization's members.

As the experiment trials continued, it became clear that Korda was the most suitable vessel due to her mental strength and inability to feel fear. She was taken by Wesker and subjected to the transfer, but Korda's mental strength managed to inhibit Wesker's transferred consciousness, while the original body of Wesker remained alive.

Natalia fills the support role when accompanying Barry Burton just like Moira with Claire. Natalia engages in battle by using bricks as her only mean of defense and to break locks and boxes when necessary. Additionally, she can either thrust the brick while holding it on downed enemies, or toss it at an enemy for a quick act of escape. Aside from bricks, Natalia is also able to utilize smokescreen bottles to momentarily blind enemies and briefly reveal Glasps which are otherwise nearly invisible.

Natalia has a special sensing ability that sets her apart from the other characters. When the player is controlling Natalia, a yellow colored aura (in the default mode) can be seen around an enemy identifying they are nearby, including ones that are present in different rooms. Furthermore, the aura will change color to a dark red once the enemy is aware of Natalia or Barry's presence. Natalia is also able to use her unique ability to find insect larvae, which she can destroy with a brick. The player can use BP to upgrade the "Sixth Sense" skill, which will increase the range of Natalia's awareness.

When pressing the aim button, Natalia can point at an enemy to inform Barry that the "monster" is coming or is nearby. Natalia can also pinpoint a creature's weakness by pointing at it, as she can "see" a Revenant's core which must be shot to kill it. She can also use her unique point command to reveal hidden items in the darkness.

Since Natalia's physical appearance is much smaller than Barry's, she uses this advantage to pass through narrow areas; an example being when she crawls through a small hole and unlocks the door for Barry to pass. Another capability Natalia has is being able to unlock item boxes that Barry cannot open himself by using one of her small hands.

In the Extra Episode: Little Miss, Natalia is playable alongside Alex Wesker's copied consciousness in the form of Dark Natalia. The objective is to find the letters from Natalia's missing teddy bear, Lottie, and advance through each area without being caught. If Natalia is spotted by an enemy, she will crouch down in fear and proceed to "faint" as Dark Natalia taunts her, failing the mission as a result.

Natalia is unable to sense enemies, so she must rely on Dark Natalia's abilities in order to reach her destination. The only weapon available to her is the smokescreen bottle, which she can use to blind enemies and run past them without being detected. Also, Natalia is the only one who can pick up key items and open doors.

Dark Natalia
Add a photo to this gallery
Retrieved from "https://capcom.fandom.com/wiki/Natalia_Korda?oldid=110124"
Community content is available under CC-BY-SA unless otherwise noted.