Nanami is a character from the Ōkami series of action adventure games. She first appears in Ōkamiden where she serves as one of Chibiterasu's partners.

A mermaid who is a royal vassal for Queen Otohime. She uses magic as her weapon. Nanami can swim to treasure chests since Chibiterasu, unlike Amaterasu, doesn't know how to swim.

Nanami (chronologically speaking) was a very high spirited mermaid when she met Chibiterasu. That time, Chibiterasu haven't yet to go back in time to meet Nanami with Otohime. Nanami is considered as a very independent young mermaid, as she is also very responsible until she is very commited to retrieve back her lost Dry an Wet Jewels from Bullhead. In the past however,(chronologically when Chibiterasu went back in time) Nanami was being less upfront with Chibiterasu, since he had just instantly jump onto Nanami when he greets her.

Nanami is considered as quite a girly girl, when Genji took her with him in the wild goose chase at Sage Shrine, she had done nothing to stop him until she went fed up when Genji keep flying her over and over around the place.

Nanami, when caught by Kokari, was very mad to humans when Kokari actually threw her back into the waters until she got caught by the Witch Queen's lackeys (back then, Kokari was trying to use Nanami as a sacrifice for Bullhead as an attempt to cease the flood of Agata Forest).

Nanami is also known to be very appreciative towards treasured items. She treasured her Dry and Wet Jewel so much that she is very determined to take it back from Bullhead. She is respectful towards others' treasured items as well. Like after Kokari rescued Chibiterasu, Kuni and her using his fishing pole, it broke. At first, Nanami is still mad at Kokari for using her as sacrifice, but when Kuni tried to pity him for Kokari had to sacrifice his treasured fishing pole that Karude gave him, Nanami was surprised. Implying the fact that she care for someone's who treasured something so dear to themselves like her and her Dry and Wet Jewels.

Given the sensual way she poses when she gets on Chibiterasu (and the hearts that appear further illustrate that) it could be an implication that she has a sultry side.

Nanami is a child mermaid with aqua-colored hair. Her hair is of medium length and appears to be composed entirely of water. When the Wet and Dry Jewels are in her possession, she ties her hair into two buns and attaches the Jewels to it. Her attire is a turtle shell-like chestplate, with several scale-like laces. She also wears bracelets on both wrists. It is debatable if the frills by her bracelets are her actual frills or ornaments.

Notably, Nanami is the only Dragonian in the entire series to be a mermaid, while the others have feet. she is also the only known Dragonian to have hair made entirely of water. She has two pairs of tangerine frills on her head, one pair that protrudes from the top of her head and another pair that hangs downwards just behind her ears. The frills on her hands are also tangerine, and are similar in appearance to dorsal fins. Just below her belly button is her mermaid tail, just as tangerine, slightly golden and as stout as Nanami herself.

As a mermaid who possesses the Wet and Dry Jewels, Nanami has the ability to generate small amount of water for Chibiterasu's Waterspout Celestial Brush technique. This allows Chibiterasu to put out fires and extinguish demons which are of the fire element, such as Fire Eyes. In combat, Nanami uses magic as her weapon. After Chibiterasu completes a combo, Nanami will jump upwards and create a large splash of golden colored water around herself that deals damage to any adjacent demons. However, her magic attack may be easily disrupted since her combination attack has the smallest range and tendency to hit.

Since Nanami is a mermaid, she may be the only partner of Chibiterasu to move freely above or in the depths of water. Unlike Kurow who can only levitate on a horizontal axis, Nanami can swim deeper if the camera angle is correctly adjusted.

Chibiterasu and Kuni first meet Nanami in Agata Forest. While exploring the shore of the massive lake formed by Bullhead, they see her diving in and out of the water. Nanami tells them that she is searching for treasures given to her by Otohime. She seems to recognize Chibiterasu and calls him by the name she gave him during their first meeting, "Squiddy" (much to his dismay) and referring to his friend with blond hair. She then swims off.

At an unknown point in time, she is caught by Kokari, who is forced to offer her to Bullhead to ease Agata Forest's flooding. This proves unsuccessful, and Bullhead gives her to the Witch Queen, who makes her the prize in a tournament in which the winning demon would get Nanami (and, it is implied, eat her). Luckily, Chibiterasu and Kuni disguise themselves as demons and win Nanami in the contest. However, she is wary of them, as her experience with Kokari had made her believe humans were evil. Trying to save her anyway, Chibiterasu and Kuni try to move the fishbowl in which she is trapped, but it is too heavy. At that moment, Kuni accidentally loses his disguise, and the Witch Queen attacks him and Chibiterasu. After her defeat, she regains consciousness and sends numerous fire spirits at them. Kuni stays behind to delay them as Chibiterasu and Nanami make their escape. At the exit, they regroup with Kuni but find that the portal out of the Onibi Market is too high to reach. Luckily, Kokari saves them, albeit at the cost of his fishing pole. After hearing Kokari's story and recognizing that Kokari sacrificed his prized fishing pole to save their lives, Nanami forgives him and changes her views of humans. However, Kuni is abruptly kidnapped by Bullhead. Nanami and Chibiterasu venture into the Five-Story Pagoda to save him.

Along the way, they encounter Nuregami, and Chibiterasu receives Waterspout, which he uses in conjunction with Nanami's water-based abilities. At the end of the pagoda, they find Bullhead, who claims to have eaten Kuni. After defeating him, Kuni climbs out of his mouth and presents Nanami with the Wet and Dry Jewels, which he found in Bullhead's stomach. However, Bullhead is still alive. Nanami uses the Dry Jewel to dry up the water and drown the fish on dry land, but it proves unsuccessful. Kuni and Chibiterasu then slice the fish several times, mortally wounding him. However, with his last breath, Bullhead floods the area. Everyone is carried away in the flood, although Nanami isn't harmed. However, she becomes separated from the others with the resulting collapse of the pagoda. Kuni is knocked away by a log, but Chibiterasu tries to save him. To prevent Chibiterasu from being swept away with him, Kuni knocks Chibiterasu away and sacrifices himself. Nanami rescues the half-conscious Chibiterasu and takes him to the now-cursed Ryoshima Coast. She tells him that she can still feel Kuni alive somewhere, as she can feel his life force in the ocean. However, she is unable to help in the search because she must return to Otohime. Telling Chibiterasu to not forget her, she swims away to North Ryoshima Coast. She said, "I know you don't remember this... but we did meet before you know. I know you'll remember someday.". Chronologically, this is the last time she is seen, although Chibiterasu and Kurow later meet her in the past, during the events she references when she meets Chibiterasu in Agata Forest.

When Kurow and Chibiterasu travel back in time nine months, Chibiterasu sees Nanami again during his search for the Knowing Jewel, which he hopes will provide information about Akuro. Otohime is summoned, and with the help of Chibiterasu, she turns into the Water Dragon. Otohime offers to give Chibiterasu and Kurow a ride to the Sage Shrine, which houses the Knowing Jewel, but Kurow is afraid of water. As a result, Otohime summons Nanami. Though Chibiterasu recognizes Nanami, she does not know him yet. She thinks Chibi's markings look like tentacles, so she names him Squiddy. They go to the Sage Shrine, where they find the Lucky Mallet. She uses it to shrink them so they are able to explore the shrine. They encounter an Asteroidean and defeat it. When they find the Knowing Jewel after some more exploring, Nanami helps Chibiterasu read what it says, since he is illiterate. After they find a sufficient amount of information on Akuro, she and Chibiterasu return to the Goryeo and say their goodbyes. Later on in the Dark Realm, Nanami appears during the rematch against Bullhead. Because she is wearing the Wet and Dry Jewels, which she lost after her first meeting with Chibiterasu and possessed after the second, and because she recognizes Chibiterasu, it is possible that this is their third meeting. 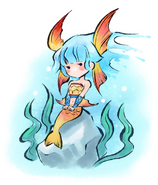 Add a photo to this gallery
Retrieved from "https://capcom.fandom.com/wiki/Nanami?oldid=135540"
Community content is available under CC-BY-SA unless otherwise noted.