Namco × Capcom (ナムコ クロス カプコン, Namuko Kurosu Kapukon?) is a tactical RPG crossover game developed by Monolith Soft and released by Namco only in Japan 2005 for PlayStation 2, featuring characters from games produced by both Namco and Capcom. The game has a fan translation in English, released in 2010. Namco × Capcom is the first game in Namco's Cross series of crossover games. Character art was done by Namco artist Takuji Kawano.

Namco × Capcom is a hybrid of an action-RPG and a tactical-RPG. Movement is done on a square grid with turns being determined by figuring out which character has the highest AP. On the player's turn, he/she can move the character into position and choose to attack an enemy.

At this point, the game switches into the action-RPG portion. The player's character has a number of "Branches" they can use. Each direction on the directional pad combined with the circle button will perform an attack. Each attack uses up 1 branch. If the player can perform a certain number of Aerial Chains (hitting the enemy in mid-air), bonuses may be gained, such as items, super meter, extra damage, or more branches to use in the turn. Bonuses other than items are converted into extra Experience Points at the end of an attack sequence. Upon filling up the character's Special Gauge they can use the Triangle button to perform a special attack. They will also be able to select a Multiple Assault attack if their units on the board meet the conditions. Defense also puts the player in the action-RPG mode, this time blocking to reduce the enemy's damage. Successfully blocking attacks will also increase the amount of AP the player's unit has.

There are 50 levels total (45 normal and 5 prologue) and the game could take from around 70-100 hours to complete.

The year is 20XX (sometime in the twenty-first century), and the story is driven by Arisu Reiji and his kitsune mentor Xiaomu (original characters created specifically for this game). The two of them are operatives for the investigative task force Shinra that looks into spirit and otherworldly disturbances. They are initially investigating a strange "sleeping sickness" in the Shibuya area of Japan, when it becomes apparent that something much larger is at stake.

The story opens with Reiji and Xiaomu being called to deal with interdimensional rifts opening in their world. These rifts pull in beings from alternate realities, many of which ally with Reiji and Xiaomu to fight both the forces behind the rifts and opponents drawn from their native universes. The group are opposed by Ouma, a group dedicated to causing chaos, with their main rival being Ouma operative Saya, a being similar to Xiaomu. It is eventually revealed that Ouma wish to resurrect a dark deity dubbed "99" through the merging of multiple realities. Reiji's father Shougo fought Saya to prevent this ten years before, and was forced to sacrifice himself with Xiaomu's aid to succeed. While initially defeated, Ouma succeeds in merging the worlds, and 99 is resurrected using Saya as a host. While Reiji is prepared to sacrifice himself as Shougo did, his and Xiaomu's allies return from their realities and combine their powers to cripple 99. Saya allows herself to be killed by Reiji to destroy 99 permanently. At a celebratory party which all their allies attend, Reiji and Xiaomu mutually declare their loyalty and love for each other.

Namco would later create a spiritual sequel of this game; Project × Zone, a crossover that features characters not only from Namco and Capcom but also newcomer Sega, exclusively for the Nintendo 3DS. Unlike Namco X Capcom, it was released overseas; first in Japan in 2012 and later in North America, Europe, and Australia in 2013. A sequel, Project × Zone 2, was released in 2015. Although it is still primarily a crossover between the three aforementioned companies, characters from Nintendo joined the cast for the first time; in this case, it was two characters from Nintendo's Fire Emblem: Awakening and one from Xenoblade Chronicles. 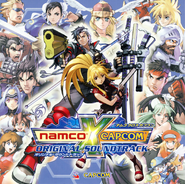