Mr. and Mrs. Orange are characters from the Ōkami series of action adventure games.

Mr. Orange is the elder of Kamiki Village and Mrs. Orange is his wife.

Mr. Orange is a mostly gentle old man. He enjoys sake, despite that he claims he doesn't drink. He has a talent for dancing, even creating the Konohana Shuffle to revitalize Konohana (along with Sakuya). He shows concern for all the villagers, especially towards Kushi when she was chosen as Orochi's sacrifice. He also shows that he has little tolerance for foolishness, Susano usually the one to take the scorn. Unfortunately, he lacks faith in the gods since he sees Amaterasu as a normal white wolf.

Mrs. Orange is a kind lady, she appreciates help with Amaterasu drying her laundry, and will gratefully make her special cherry cakes in return.

Mr. Orange is known for his signature orange on the top of his head, hence the name, Mr. Orange. He, at his old age, has a bald head and a long, white beard. He also dons a blue robe and carries a wooden staff to support his frail old self. Also, he has a rope tied around his neck, significantly resembling a shimenawa with two shide on the sides of the central knot.

Mrs. Orange also has an orange on top of her head. She has short white hair and wears a simple headband around it. Her clothes consist of a simple purple robe and a light yellow sash. She carries a huge basket on her back, which holds her laundry.

Mr. Orange plays an important role in rejuvenating Konohana, being that he is the only one able to do so. When Amaterasu blooms all the smaller trees in the village, she must then help Mr. Orange bloom Konohana. Upon doing so, she will revive Sakuya, earn some praise, and obtain the Lily Pad brush technique. He mostly appears in the First Arc but no more than that, except during the cutscene prior to the final battle against Yami.

After Amaterasu restores daylight with her first use of Sunrise, she can listen to Mrs. Orange's complains about her drying pole missing. Using Rejuvenation, the pole will be restored, but still, she wants her laundry to dry more quickly, so Amaterasu uses Sunrise again. After this small sidequest, every night, if Amaterasu visits Mrs. Orange, she will give her cherry cakes.

Mrs. Orange does not have much role in the game, other than providing some information about her cherry cakes. 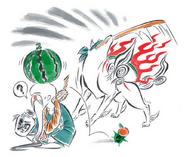 Mr. Orange with Amaterasu.
Add a photo to this gallery
Retrieved from "https://capcom.fandom.com/wiki/Mr._and_Mrs._Orange?oldid=123088"
Community content is available under CC-BY-SA unless otherwise noted.