Mr. Famous, known as Eguchi Meijin (江口名人?) in Japan, is a character from the Mega Man Battle Network series. He is a scientist who works with Lan's father, Yuichiro Hikari. He wears glasses, a lab coat, and a numbered shirt.

He is the creator of several NetNavis, and uses four in the games:

Except for Punk, who is based on the classic Mega Man boss, his other Navis were created by fans in a contest sponsored by Capcom.

Mr. Famous doesn't have much storyline significance, and is usually an optional boss. He sometimes gives useful hints. 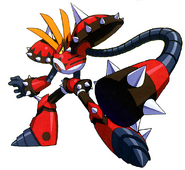 Mega Man Battle Network 6
Add a photo to this gallery
Retrieved from "https://capcom.fandom.com/wiki/Mr._Famous?oldid=131120"
Community content is available under CC-BY-SA unless otherwise noted.