Monster Hunter Stories (モンスターハンター ストーリーズ, Monsutā Hantā Sutōrīzu?) is a role-playing video game developed by Marvelous[1] and published by Capcom.[2] It is a spin-off title set within the Monster Hunter series.[2] The game was released in Japan for the Nintendo 3DS handheld game console on October 8, 2016,[3][4] and was later released in North America, Europe and Australia in September 2017.[5][6] A mobile version of the game was released on December 4, 2017 in Japan[7] and later in Europe and North America in September 2018.[8]

Unlike any of the previous titles in the Monster Hunter series, Monster Hunter Stories lets players take on the role of a Rider instead of a Hunter, and are now able to battle in an RPG turn-based system.[9][10][11] Major additions in this installment include hatching eggs and befriending monsters, battling alongside them, executing special Bond attack moves, and customizing your monsters’ abilities and appearance.[9][12][13][14] The game features support for Amiibo figurines,[3][9] with a first set launching alongside the game,[4] and a second set launching two months later.[15] A similarly named anime series is a loose adaptation of this game.

Monster Hunter Stories features a completely new gameplay different to the past titles in the series. The player assumes the role of a Rider who befriends monsters by stealing eggs and hatching them. The player then have the ability to name them, ride them in the field, and have them join the player in battle.[13][12][9] The player is able to explore different environments, encounter monsters in the field, battle them, collect items and steal eggs from monsters’ nests.

The battles now have an RPG turn-based combat system and during the player’s turn, both the rider and their companion monster will get to attack the enemy. Attacks for both the player and the enemy come in three categories: Power, Speed, and Technique. Each category is stronger against one in particular, similar to Rock-paper-scissors, Power will win against Technique, Speed will win against Power, and Technique will win against Speed. In this game, the player only has a choice of four weapons to use in battle, those being the Great Sword, the Sword & Shield, the Hammer, and the Hunting Horn. The player will have access to different skills depending on the weapon and equipment they uses, and they will also be able to use items in battle.[9][16]

Companion monsters can be customized with the Transmission Ceremony feature, in which the player transfer Bond Genes into a monster’s slots in order to unlock and awaken their stats and abilities. This allows for further customization and adjustment to the player’s play style.[14][9] The game features multiplayer battles via local or Internet connection.[17][14] The game is also compatible with Amiibo figures, with the figures from the Monster Hunter Stories line of amiibo unlocking original and special monsters, among other bonuses.[9]

Series executive producer Ryozo Tsujimoto stated that the concepts for this RPG were based on the Monster Hunter series players’ interests for the world’s setting, and livelihood of the monsters, and that these concepts were thought of since 2010. The reasoning behind the switch from the Hunter role to a Rider one was to give the spotlight to the monsters, along with the idea of petting them and seeing things from their point of view.[9]

Monster Hunter Stories was first announced in Japan on April 2015 at the “Monster Hunter Fest ‘15 Finals” event by Capcom with a planned release in 2016.[11] A demo of the game was released digitally in Japan on September 20, 2016, via the Nintendo eShop. The demo features two game modes: “Quest Mode”, which allows the player to play part of the story, and “Tournament Mode”, that lets the player partake in Rider battles.[18] The game was subsequently released for Nintendo 3DS in Japan on October 8, 2016.[3]

Similar to previous Monster Hunter games, the player can obtain armor, items and clothing themed to other franchises and other third-party titles. Stories includes such themes based on Puzzle & Dragons X, Chibi Maruko-chan,[19] Jump,[20] and The Legend of Zelda.[21] 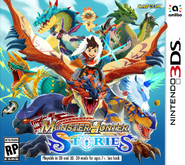 North American cover
Add a photo to this gallery

Retrieved from "https://capcom.fandom.com/wiki/Monster_Hunter_Stories?oldid=135069"
Community content is available under CC-BY-SA unless otherwise noted.