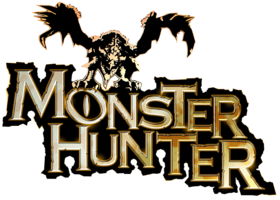 Monster Hunter (モンスターハンター, Monsutā Hantā?) is an action role-playing game developed and published by Capcom for the PlayStation 2. It is the first installment in the Monster Hunter franchise. The game was first released in March 2004 on Japan, September 2004 in North America and May 2005 in Europe.

The game puts players on the role of a Hunter slaying or trapping large monsters across various landscapes as part of quests given to them by the locals. As part of its core gameplay loop, players use loot gained from slaying monsters, gathering resources, and quest rewards to craft improved weapons, armor, and other items that allows them to face more powerful monsters. Much of the game can be played offline through single-player. The majority of the content is in the online section of the game. Only some monsters are found in single-player and the player's rewards are smaller (and less valuable) when they are offline. The goal for players online is not to defeat the most monsters but to reach the highest hunter rank, which is the storyline that is carried out online by non-player characters.

Players take the role of a hunter, who is sent out on quests to battle massive monsters using a variety of weapons such as swords, hammer, bows and guns, along with tools such as paintballs, healing potions, traps, and bombs.

In order to keep up with the scaling power of the monsters, the player must gather resources in the wild, and also carve parts of the monsters they slay. These are used to create more tools, as well as more powerful weapons and armor. As the Hunter progresses, they fight stronger, more powerful monsters in various climates, such as forests, volcanic mountains, frozen wastelands and scorching deserts.

Although much of the game can take place offline through a single player mode, the most content is contained in the online section of the game. Most monsters, with the exception of a number of higher ranked monsters, or specific variations, are available to fight via single player mode. However, the same monsters can be fought online, usually ending with items of greater value or rarity not attainable through single player. Goals for players online are not to defeat the most monsters, but to reach the highest hunter rank, which is the "semi-storyline" that is carried out online by NPC characters.

Monster Hunter is played through quests given to the hunter by the Village Elder or the Town Guild. Quests can be classified into four categories: hunting, gathering, capture and event. They are also categorized into different levels, ranging from 1-8*. A newer level quests become available after certain quests of the previous * are completed.

Hunting quests make up the majority of the missions. As the name implies, the hunter will track, provoke, and eventually slay a monster or a number of monsters using various equipment including: Barrel bombs, pit traps and much more (many quests require specific equipment pieces to be completed). As the hunter progresses, the monsters will become more difficult, but will provide better materials for the hunter to utilize.

Gathering quests are missions in which the hunter must "gather" items. These items can be as simple as herbs, to as complex as pieces of a monster or ore from a mine. These quests give out the least amount of reward, but sometimes give valuable items.

Capture quests can be the most difficult to complete due to a certain degree of restraint that must be shown by the hunter. The hunter must bring the wyvern to a certain degree of damage, but not kill it (this can usually be seen by the wyvern limping). After the wyvern shows signs of physical weakness, it must be captured by snaring it in a Pitfall Trap and putting it to sleep. A captured wyvern cannot be carved since it is still alive, but the rewards are significantly rarer and the reward money is generally greater. Contract fees for Capture quests are high, but not as high as some of the rarest hunting quests.

The Event quests are an online-only feature. Every week, a new Event quest is available to hunters of any rank. These quests vary in style and difficulty. Some of the rarer weapons can be made only through Event quest rewards. Event quests are not vital to a hunter's success in the game, but are a useful way to gain experience and to obtain some rare items. Contract fees and time limits vary.

All of the quests allow two deaths, but the third death marks the failure of the quest. Regardless which player actually dies, three deaths will still fail the quest. The only exceptions to this rule are some of the Event quests, which are failed with just one death.

Monster Hunter was part of an initiative from Capcom's Production Studio 1 to develop three games, the other two titles being Auto Modellista and Resident Evil Outbreak, that takes advantage of the processing power and online capabilities of the PlayStation 2; according to producer Ryozo Tsujimoto, the system had begun to match arcade games in capabilities.[1] Tsujimoto considered Monster Hunter to be the culmination of the work of these other two titles once it was released.[1] He also felt that the game was intended for such co-operative play so that players of any skill level, working with others, could feel accomplished in taking down giant creatures.[2] Capcom's plan was that at least one of the games would sell a million copies. Both Monster Hunter and Resident Evil Outbreak eventually sold a million copies each.[2] While Capcom hasn't confirmed it themselves, it is generally believed that Sega's Phantasy Star Online, the first online RPG for home consoles, was an major influence for Monster Hunter.[3]

Monster Hunter's online servers outside Japan were closed down on December 31, 2007.[4][5] The server that displayed the "service termination notice" was taken down April 1, 2008.[citation needed]

"After more than 3 years of online service, the external company providing server hosting for both Resident Evil: Outbreak and Monster Hunter has decided to exit the PlayStation 2 online business altogether, with no possibility of outsourcing either the service or the technology."[4]

The online servers of the PlayStation 2 version in Japan closed down on July 1, 2011.

The game received "average" reviews according to video game review aggregator Metacritic.[6] In Japan, Famitsu gave it a score of all four eights, for a total of 32 out of 40.[7] 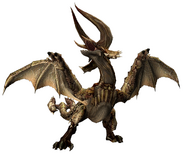 Rathalos
Add a photo to this gallery

Wii Japan
Add a photo to this gallery