Mitsuhide Akechi is a character and antagonist from the Sengoku BASARA series of action games.

Mitsuhide is an Oda vassal who would eventually betray Nobunaga. Contrary to the usual portrayal of Mitsuhide (especially in Onimusha and Koei's Samurai Warriors), here he is depicted as a sinister and sadistic psychopath who enjoys the suffering of other people; possibly of a greater evil than Nobunaga himself. He is depicted as one of two characters who can hurt his allies, though they don't lose life. Wields two scythes. His element is darkness.

Although he was playable in the Japanese version of Devil Kings, the US version relegated him to NPC status.

Before "becoming" Tenkai, Mitsuhide's default outfit had shades of purple and white. The new design is black, grey and white.

Mitsuhide was thought to be killed in Sengoku BASARA: Samurai Heroes by Nobunaga after his betrayal of him. However, by that time, a masked monk by the name of Tenkai who looks eerily similar to Mitsuhide appeared, manipulating Hideaki Kobayakawa. It was revealed in the next game, Sengoku Basara 3 Utage, that Tenkai is indeed Mitsuhide himself. 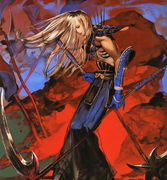 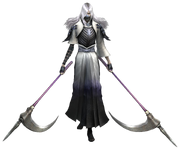 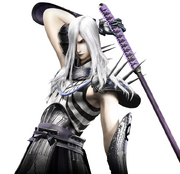 With Hideaki in End of Judgement

Wallpaper
Add a photo to this gallery
Retrieved from "https://capcom.fandom.com/wiki/Mitsuhide_Akechi?oldid=141335"
Community content is available under CC-BY-SA unless otherwise noted.