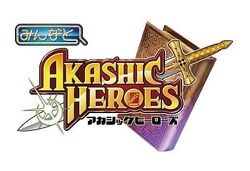 Minna to Akashic Heroes (みんなとアカシックヒーローズ Minna to Akashikku Hīrōzu) is a social card battle game released by Capcom only in Japan in July 3, 2012. This free-to-play, pay-per-item Flash game is available for smartphones (iOS and Android) and feature phones (DoCoMo, au and SoftBank). The game is part of the Minna to series.

The player's deck is formed with three Heroes, one being the leader and other two assistants. They go in missions and battle against other Heroes and Hero Gods. The character cards have one of three attributes: "Warrior" (武. Alternatively "Armed", "Force", ... Character example: Huang Zhong), "Intellect" (知. Alt. "Wisdom", "Wit", ... Hosokawa Gracia) or "Charm" (魅. Alt. "Appeal", "Attractive", ... Yu the Beautiful), and they can be in the side of Light or Darkness. Many cards have special skills. Like RPG games, in the end of the battle the player's Heroes gain experience and may level up, increasing their attack and defense.

The game holds several limited promotional events where rare cards can be obtained by players. Cards of Capcom characters also appeared in some events. As of August 20, 2012, the characters that appeared in events from the game are Mega Man, Roll, Proto Man, Bass, Wily Machine, Morrigan, Lilith, Felicia and Hsien-Ko.

The "Book of Fate" (運命の書,alt. "Book of Destiny"), which conceals a great power, is asleep in the historical world Historica. Every hero that appeared in stories, mythologies and folklores is recorded in this book that has been sealed.

However, some of the heroes that have been repeatedly deified became "Hero Gods" (英雄神), and the seal of the "Book of Fate" broke and scattered around the world. In addition, with the seal broken, the "Book of Fate" is also able to revive other heroes. Many people could use this power, and they began to recall the legendary heroes in this world again. And now the player too is standing in front of the "Book of Fate"... 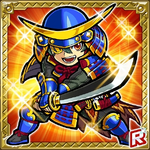 Date Masamune card.
Add a photo to this gallery 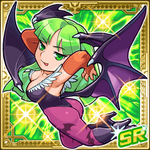 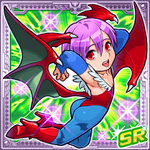 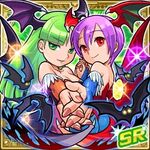 Morrigan & Lilith card.
Add a photo to this gallery

Retrieved from "https://capcom.fandom.com/wiki/Minna_to_Akashic_Heroes?oldid=129031"
Community content is available under CC-BY-SA unless otherwise noted.