Mikhail is the leader of the U.B.C.S. Delta Platoon that both Nicholai Ginovaef and Carlos Oliveira are part of. According to his backstory, Mikhail is from Saint Petersburg, Russia. He originally served the Red Army before joining his wife's guerilla force and participating in race liberation wars in neighboring countries, until he was eventually arrested by the Russian Army and convicted of acts of terrorism. He was then coerced into leading the U.B.C.S. in exchange for his men's freedom.

In RE 3, he first appears already wounded inside the city's cable car. Despite his serious injuries, he refuses to rest, as evident in an optional cut scene in which he gets out of the cable car to fight a few zombies. Ultimately, he chose to sacrifice his own life to save Jill Valentine and Carlos. He dies when he is blown apart by his own grenade in a failed attempt to destroy Nemesis.

In the novelization by S.D. Perry, Mikhail's injury was due to being shot by Nicholai. 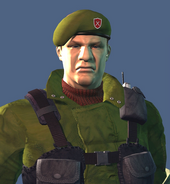 Resident Evil 3: Nemesis
Add a photo to this gallery
Retrieved from "https://capcom.fandom.com/wiki/Mikhail_Victor?oldid=132544"
Community content is available under CC-BY-SA unless otherwise noted.