Michelle Heart is the female protagonist of the shoot-'em-up game, Legendary Wings and one of its two playable characters (the other being the male protagonist, Kevin Walker).

Michelle wears a pink/red bikini, red boots and has large wings on her back. She always has a gun in her right hand.

Hailing from a world where mythology and technology both reign, Michelle Heart is one of the Legendary Wings, flying protectors of their land. Michelle can tune in and amplify human emotions, and uses that power to help keep the peace of the land. But since that power has little effect on demons, the Legendary Wings have created powerful energy weapons to repel invaders. Michelle is one of the most revered Wings, having served her duty to her fullest extent. 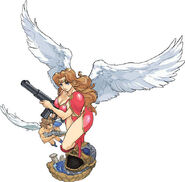 Retrieved from "https://capcom.fandom.com/wiki/Michelle_Heart?oldid=139936"
Community content is available under CC-BY-SA unless otherwise noted.