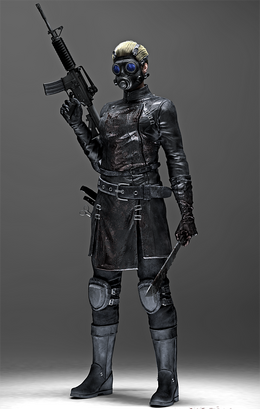 Prior to her service under the Umbrella Corporation, Michaela Schneider developed exceptional skills as a German medic, becoming an excellent healer with a keen interest in making the human body operate at maximum capacity. However, her extreme aptitude for medicine contrasts with her disregard for human life. Rather than placating her patients, she enjoyed causing them terror by detailing the exact amount of pain that they could expect to endure under her care. Her personal delight in a person's agony is further evident in the fact that she rarely ever resorts to using anesthetics on her subjects.

Following Schneider's discharge, the retired soldier made an unsuccessful attempt at reintegrating into society; her lack of concern for other people's well-being made her completely unsuitable to continue practicing medicine in a civilian role. However, Schneider's skills as a medic, combined with her lack of ethics or sentimentality, ultimately qualified her for employment in Umbrella's Security Service unit, under which she gained the codename "BERTHA." In addition to her new affiliation with the Umbrella Corporation, Bertha also sold her services to the private contractors, utilizing her expertise as a professional torturer-for-hire. As effective as she is as a healer, she is just as efficient at causing pain. Through her extensive knowledge of the human anatomy, Bertha has developed certain interrogation techniques that enable her to cause immense agony in her subjects, but without killing them. Hence, she can repeat the process multiple times. Her personal work is also a vast source of top secret and back channel information.

By 1998, Bertha was assigned to "Wolfpack," Umbrella's new U.S.S. Delta Team, which was reconstituted after the previous unit's destruction. Her unit assisted agent HUNK's U.S.S. Alpha Team in their mission to retrieve the G-Virus, and was later deployed to Raccoon City after Umbrella's t-Virus contaminated the area and infected most of the population.

Retrieved from "https://capcom.fandom.com/wiki/Michaela_Heinzwaffen?oldid=106252"
Community content is available under CC-BY-SA unless otherwise noted.