Metro City (メトロシティ Metoro Shiti) is the sprawling urban setting most notably seen in the Final Fight series, but it is also the same fictional metropolis where Captain Commando is set, albeit decades later into the year 2026. Mike Haggar was the city's mayor until the events of Final Fight 3, during which much of the city was destroyed. Cody is currently the new mayor of Metro City.

It is located on the Atlantic coast of the USA.[1]

In the first few games, the city downtown is depicted as a run down place with many damaged buildings. It has an abandoned underground basement warehouse, and an abandoned old mayor building that Damnd is hiding in. The subway is just as rundown, the trains can hardly function because of all the vandalism. The uptown area has way more crime, but people can upkeep the buildings due to people actually using them.

In Captain Commando, the city is very similar, just many years in the future. Instead of downtown, the player just start in 'city' stage, the commandos jump off a roof and begin bashing criminals. There is a video store similar to the ones in Final Fight Streetwise in which players can destroy windows, and throw enemies into them etc. There is an empty parking lot full of police cars, and criminals coming out of the sewers. After that players go into a bank and fight against the first stage boss. They proceed to the city’s museum, and then leave into ninja town. The city is almost as run down as in the Final Fight games. The tv joint makes an appearance in the ending of the arcade version.

Metro City, as depicted in Final Fight: Streetwise, consists of four districts: The Hood, Pier District, Little Italy and Japantown. All are connected via subways or train stations. Each district has one of the same four places: an electronics store, a pawn shop, a liquor store and a gym (except in Little Italy, which doesn't appear to have one). The player can buy background music in the electronics stores, weapons in the pawn shops, life or energy replenishing beverages and snacks in the liquor stores, and learn new moves and fighting techniques in the gyms. Also scattered around Metro City are arcade machines (non-playable) featuring the original Final Fight. Capcola vending machines can be struck and destroyed, after which they dispense a can of soda. The soda can be used to refill health. 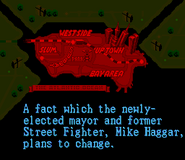 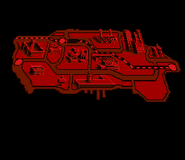