Capcom Database
Register
Don't have an account?
Sign In
Advertisement
in: Games, Commando Games, Shoot 'em up Games,
and 9 more

Mercs, known as Senjō no Ōkami II (戦場の狼II, lit. "Wolf of the Battlefield II") in Japan, is a 1990 arcade game, and the second title in the Commando series.

The players are members of a covert counter-terrorist team of mercenaries known as the "Wolf Force". The aim of the game was to rescue the former President from rebels in the fictional African country of Zutula, which bears resemblance to the apartheid regime in South Africa. The game has six main levels, plus the final level where your mission is to rescue the former U.S. president from the Hercules Transport. The game's arsenal include real-world machine guns, shot guns, flame throwers, and grenade launchers. Several missions even have pilotable vehicles available.

The 2009 Bionic Commando game identifies the returning character of Super Joe (who was also the player's character in Commando) as Joseph Gibson, essentially tying the two games together. 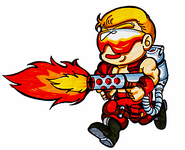 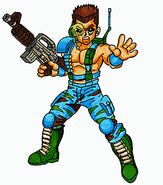