Souvenirs from across the world, journaling[1][2]

Soul Power[3] and fighting with a crystal ball[1]

Menat (メナト, Menato?, Arabic: منات) is a video game character from the Street Fighter series, first appearing in the second DLC season of Street Fighter V.[4] She is an young Egyptian fortune teller residing in Italy and the Soul Power wielding apprentice of Rose.

Menat is a slim woman with dark skin and green eyes. She has short dark purple hair styled into a bob with blunt bangs covering her entire forehead. She wears soft purple lipstick and eye shadow.

Her outfits are in Egyptian motif; she wears a dark purple short sleeved leotard with gold and neon blue accents and a purple sash in both of her shoulders. Her waist resembles a side belt, a blue and gold necklace and a gold tiara on her head. On her feet are a pair of thigh high stockings, with the heels and toes cut out.

Her first alternate costume has her wearing a long magenta hooded sleeveless revealing dress with gold accents and a gold Egyptian necklace on her neck.

Her second alternate costume has her wearing a white mummified revealing suit and matching thigh high boots. Her bob lengthens into shoulder length and she wears a traditional Egyptian headdress on her head.

Menat can act a bit empty headed at times, yet she has a polite but serious attitude. She travels the globe to convey various premonitions.[1] At times, Menat can appear childish, energetic and bubbly. She can be annoyed towards certain people, like with the lower ranked Shadaloo soldiers.

During development Menat was considered to use other objects to attack, including smoke, golden dust, and being a tahtib fighter that uses a staff.[5] Menat was also originally planned to be an Italian like Rose before being settled to be Egyptian.[5]

Her name "Menat" was a name used for the goddess Hathor. With a slightly different hieroglyphic spelling, it referred to an ancient Egyptian artifact which was closely connected with the goddess Hathor. It was used as a protective amulet, meant to ensure good luck and fortune and to protect against evil spirits.

Additionally, Menat does a few poses where she mimics a cat, which is an homage to Egyptian culture where they worshipped cats.

She has great respect for Rose, who she always refer to as "Master", and tends to imitate both her voice and her actions.

Menat is currently working together with Maggio, who is searching for his sister Aprile.

Menat appears behind Ed, warning him about his fate and that he and someone else would come across hard times. After fighting Ed, Menat warns him once more about his fate before disappearing. She later meets Oro and tries to warn him about her predictions (which he already knew about). Afterwards, her crystal ball glows, showing M. Bison. She is confronted by lower ranked Shadaloo soldiers and Aprile. After she defeats them in annoyance, she warns them about Bison's fate before escaping.

Menat first appeared in Ed's character story with the same role but there is no fight shown between them since Menat was not a playable character at the time.

Menat fights using Soul Power[3] like Rose so her abilities are somewhat similar to her teacher. Menat uses a floating crystal ball named Left Eye of the Lion (獅子の左目?)[5] to attack her opponents with. She also uses tricky dance-like moves.[1]

Her V-Trigger is the Wisdom of Thoth; she summons six orbs, each linked to her normal attacks. Pressing and releasing a normal attack sends the orb flying at the opponent. She can release any orb by using a different normal.

Her V-Skill is Kamal; while the crystal sphere is retracted, it lets her reflect the average projectile back at the opponent. If the crystal ball was sent out into battle prior to using her V-Skill, it will absorb the projectile to help build up her V-Gauge. This can also be used to launch the opponent into the air to help extend combos.

Her V-Reversal is the Left Eye of the Lion.

Her Critical Art is the Nefertem; she unleashes a single orb to ensnare her opponent on multiple hits to make critical damage. 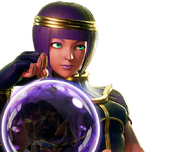 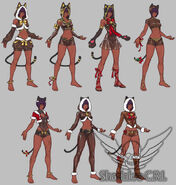