The game was re-released in 2010 as part of the compilation game, Mega Man Zero Collection for the Nintendo DS. 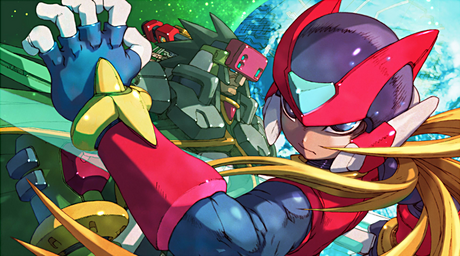 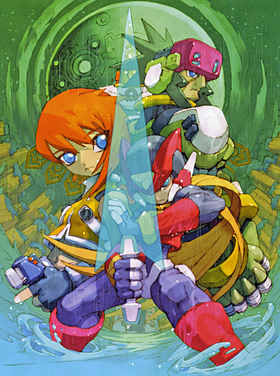 Humans have begun leaving Neo Arcadia since Dr. Weil assumed power. Labeled as human Mavericks for opposing his rule, a caravan led by a journalist named Neige is attacked by Weil's army of Variants on their way to freedom. Zero and the small handful of resistance members happen upon them as they drive cross-country in their convoy and come to their aid. After rescuing the caravan, Neige explains that they were en route to Area Zero, one of the last natural habitats that can support human life outside of Neo Arcadia.

Shortly after parting ways, Zero learns of a plot to destroy Area Zero from Craft, Weil's second in command, called "Operation Ragnarok" . It was meant to destroy all environments outside of Neo Arcadia, so that life could not be sustained outside of it; this would force all humans to return and live under Weil's rule.

After defeating four of the Eight Warriors, Area Zero itself comes under attack by Neo Arcadia. Zero fights through it and sees Craft at the end. Zero and Craft fight, with Zero winning but Craft still alive. Neige appears to break up the fight, and Craft kidnaps her. Zero then goes to the prison where Neige is held and rescues her.

After stopping the Einherjar Warriors, Zero learns that they were just a distraction, and an orbital satellite, Ragnarok, is going to wipe out the environment with its cannon. But before Weil can use it himself, Craft rebels against Weil and attempts to fire upon Neo Arcadia in an attempt to kill him, regardless of the fact that innocents might be killed, but is stopped by Zero.

Weil had teleported directly onto the station and manually directed its flight path into a crash landing into Area Zero. As the station plummets toward the planet, Zero teleports onto it and makes his way to Weil. Zero questions him as to how he survived the initial strike on Neo Arcadia.

Zero learns that Weil was a human, made into a bionic/reploid hybrid Weil by the same people who exiled him and Omega into space at the end of the Elf Wars. His new body is incapable of aging or dying, since it constantly repairs and upgrades itself. Weil purposely set the station to crash, knowing full well he could survive the impact and oversee the destruction of Area Zero personally. Weil then fuses with the Ragnarok core and attacks Zero as the final boss. After an intense battle which destroys Weil's fused body, Ragnarok breaks apart on its way down to Earth, leaving Zero unable to escape.

Ciel passes through Area Zero, where it is confirmed that Zero did not teleport back. In the final scenes of the game, the player sees Ciel atop a hill, on her knees and crying during the credits. Afterwards, she stands up and expresses her faith in Zero, and the hope that he'll return someday. The scene fades to white, and then to an image of Zero's helmet as it lays shattered on the ground with the sun in the background.

Craft
Add a photo to this gallery