Mega Man ZX, known as Rockman ZX in Japan, is a action platformer game developed by Inti Creates and published by Capcom. It is the first of two games in the Mega Man ZX series, a sub-series within the Mega Man meta-franchise. It features, for the first time in the Mega Man franchise, both a male and a female protagonist. Keiji Inafune was one of the producers. The game was released in 2006 and was followed by a sequel, Mega Man ZX Advent.

Mega Man ZX contains elements from the Mega Man X series and the Mega Man Zero series. The players are on a 2-dimensional overlay map with sprites where they engage enemies to finish their mission.

The main feature in Mega Man ZX is the "Biometal" (ライブメタル Raibumetaru, Livemetal). Biometal is a substance that stores the data (e.g. personality or battle data) of a Reploid or human, and can be created by more than one process. The two protagonists, Vent and Aile, use the M.E.G.A. System (Meta-Encapsulated Granule Awareness SYSTEM), or the R.O.C.K. System (Rebirth Of Crystallised Knowledge SYSTEM) in the Japanese version, to activate the Biometals and transform into a form similar to what the Biometal was based on. Anyone who uses the M.E.G.A. System is called a "Mega Man". Likewise, anyone who uses the R.O.C.K. System is called a "Rockman". Rockmen typically hold out a Biometal in front of them and cry out "R.O.C.K. On!"(Megamerge in English) to activate the Biometal. This process is called Megamerging in the English version, although the characters still say "Rock On" because the game did not get an English vocal dub.

The player initially begins with only Model X, but upon obtaining Model Z, Model X is used to fuse with the other Biometals. This is called Double R.O.C.K. On in the Japanese version, and Double Megamerge in the English version. At this point, Model X can no longer be used alone for the rest of the game until it is unlocked by completing the game with both characters in normal or hard modes only. Biometals of the Four Guardians from the Mega Man Zero series are found throughout the game, and these are the only Biometals that can be upgraded with Energy Crystals. These four Biometals use the touch screen in various ways. A seventh Biometal is available after completing the game and fulfilling certain requirements.

The Overdrive Invoke System (or O.I.S.) can be activated on the Biometals of the Four Guardians, giving special abilities to the player. Model HX, FX, and LX will give the player elemental attributes to some of their attacks (similar to the elemental chips from the Mega Man Zero series), while Model PX gives the player double damage and the ability to dash through enemies. By charging their weapons, the four Biometals are also able to perform attacks similar to the Four Guardians. For example, Model HX can summon a hurricane and Model PX can throw a large shuriken. However, O.I.S. consumes Weapon Energy and once it runs out, you can't use the Model's special attacks until you get more energy.

Players can also revert to Humanoid form at any time. Although Vent/Aile cannot attack, dash, or wall-climb without a Biometal, they have some abilities that are impossible to do with a Biometal. Vent/Aile is able to crouch and crawl, fitting through tight spaces otherwise impossible. They will float to the surface of water instead of sink, some NPC characters will be too afraid to speak to Vent/Aile when they are using a Biometal, and enemies will not become hostile in certain areas.

Two centuries after the events of Mega Man Zero series,[1] in the year 25XX, humans and Reploids now coexist peacefully.

After some time of peace and prosperity, humans, reploids, and the humanoids (cyborgs in the Mega Man ZX universe) of Earth manage to revive some of the former Nations. After which, several incidents of reploids becoming Mavericks are reported. The Mavericks made several areas dangerous. Trading between nations became obstructed, which caused the nations to become divided into utopian cities such as "Innerpeace." These cities became safe havens for peaceful reploids, humans and humanoids. The dangerous Mavericks known as Mechaniloids began to appear in the outlands and threatened the peace. The utopian cities and the outlands were divided into separate Areas and remarkable developments were made due to the efforts of the corporation Slither Inc.

Slither Inc. possessed technology unearthed from ruins in the Outlands. Peaceful life in Innerpeace is maintained by using the technology offered by Slither Inc.

Still, Maverick attacks occur in the frontier regions, which are more exposed to the enemy. To repel the attacks, the humanoids in these areas developed an organization devoted to the defending their region. This organization is known as the Guardians. The Guardians defend the Outlands and investigate the cause of the Maverick attacks. The original leader of the Guardians disappears during the investigation of an Outlands area.

A decade prior to the beginning of the story, the protagonist, Vent or Aile (depending on what gender the player states they are) loses his/her mother to a Maverick raid on an amusement park and becomes an orphan. He/She is taken in by Girouette Giro, the owner of Giro Express, which is a delivery service delivering all kinds of items. Giro is contacted by an unknown person to deliver an important package to a rendezvous point in the Area A forest.

The game begin at a cliff where Vent/Aile, overlooking the area and the rendezvous point, reminisces about the Maverick raid that took the life of his/her mother. Just as Giro and Vent/Aile are ready to pull out, a group of Mavericks attack them and Vent/Aile falls to the forest below. After waking up, Vent/Aile is told to deliver the package while Giro deals with the Mavericks. Here, he/she meets face-to-face with Prairie, the leader of the Guardians. This meeting is cut short when a large Mechaniloid snake attacks the group. The package, a piece of floating metal known as Biometal Model X, lends its strength to Vent/Aile, allowing him/her to "Megamerge" and transform into Mega Man Model X. With the help of Model X, the snake is destroyed. He/she is then allowed by Prairie to keep Model X and look for Giro. After finding Giro, in the form of Mega Man Model Z, they board an airship deemed the Guardian's base. Later, a Maverick attack is spotted at the Slither Inc. main office. The duo meet the president of Slither Inc., Serpent, and his reploid guardians, Prometheus and Pandora. Serpent reveals his knowledge of the Biometal and says that he's also a Mega Man, possessing Model W. He expresses his intent to find the Model W Core, and leaves, but not before possessing a weakened Giro with the power of Model W. A fight ensues, resulting in the death of Giro. In his dying breaths, Giro hands Model Z over to Vent/Aile and then transforms into a Cyber Elf. By "Double Megamerging" with both Model X and Model Z, he/she uses the form Model ZX to escape. Now the Guardians, including Vent/Aile, must recover eight Biometal fragments and stop Serpent.

After finding four of eight biometal pieces, the Guardian base comes under attack from Mavericks, led by Prometheus. Prairie requests that Vent/Aile return immediately and help defend the base. He/she later finds Prometheus inside the system core room and they fight. Prometheus is eventually defeated, and the attack stops. Vent/Aile proceeds to find the remaining four Biometal pieces.

After retrieving all eight biometal pieces and their passwords, Vent/Aile is able to enter the ruins and locate model W. Before doing so, he/she returns to the ship and analyzes a chip containing data on the biometals left by Prairie's sister, who also explains the origin of Model W.

After analyzing it, they enter the ruins. After finding Model W, Vent/Aile is stalled by Pandora and the biometal is moved elsewhere. He/she later receives information that a huge Maverick raid led by Prometheus and Pandora is happening on the highway, and he/she proceeds to stop the ongoing chaos there. He/she is confronted by the duo for the last time, and they fight. Prometheus and Pandora are defeated but manage to escape. Vent/Aile then receives a signal from Model W, located at the Slither Inc. Head Office. Vent/Aile receives his/her mission to destroy Model W.

After defeating many enemies in the tower and arriving at the top, Vent/Aile face off against Serpent, who feeds the Model W core with a lot of innocent Cyber Elfs, and then fuses with it. Vent/Aile suddenly reverts to human due to the realization that the hatred of the Mavericks that he/she has kept inside his/her heart is the last thing needed to unleash Model W's full power, thus resulting in his/her temporary defeat. However, after gaining courage from the biometals, he/she Megamerges into Mega Man ZX and challenges Serpent to a final battle. Serpent is eventually defeated. The tower collapses, destroying Model W and killing Serpent. The game ends with Vent/Aile reunited with his/her Guardian friends. 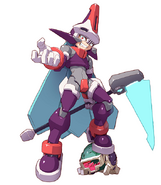 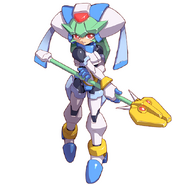 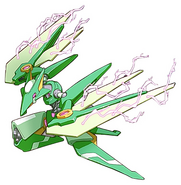 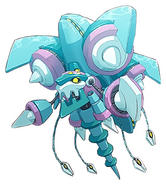 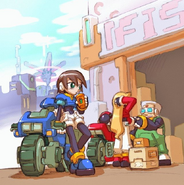 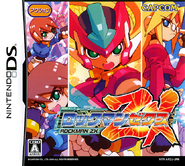 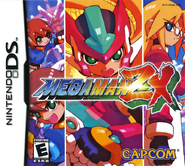 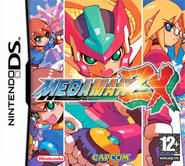 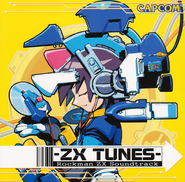 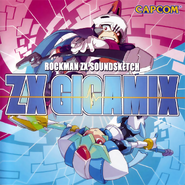