Mega Man Xtreme 2 (Rockman X2: Soul Eraser in Japan) is the second handheld game in the Mega Man X action platformer game series, released in 2001. The story of the game takes place between Mega Man X3 and Mega Man X4. Unlike the previous game, Mega Man Xtreme, this game is not compatible with the original Game Boy, being made only for the Game Boy Color. Artwork was done by Haruki Suetsugu.

All over the world Reploids are having their programs (memories and personalities) suddenly erased, becoming hollow shells. This phenomenon is named "Erasure". One day, the readings of Reploids in "Laguz Island" in the Southern Ocean instantly vanished, and the Maverick Hunters X and Zero received orders to investigate the island in an attempt to determine what is going on and who is behind the soul erasures.

Gareth
Add a photo to this gallery 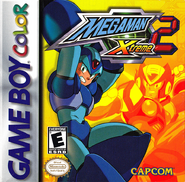