Mega Man Xtreme is an action-platform game that features the same gameplay as the Mega Man X games on non-handheld game consoles. As the titular protagonist, the player is tasked with completing a series of selectable, side-scrolling stages in any order desired. X has the ability to run, jump, scale walls, and fire his chargeable "X-Buster" arm cannon to overcome enemies in each stage. These stages consist of various obstacles, enemies, and a boss at the end. As the player progresses, helpful power-ups such as health, weapon energy and extra lives can be found or dropped from slain foes. Permanent power-ups include special tanks that extend the player's life bar, storage units that allow for surplus health energy to be saved for later use and armor parts that grant X new abilities such as improved damage resistance and ability to dash-jump off walls. Fully depleting the health of the end-stage boss will clear the stage and allow X to add the boss' weapon to his arsenal. As each boss is weak to another's weapon, the player can defeat the bosses more easily by choosing to complete the stages in a specific order.

Like the portable incarnations of the original Mega Man series, Mega Man Xtreme borrows content from its home console counterparts released on the Super Nintendo. The game is composed mostly of elements from Mega Man X and X2, as well as new content made specifically for the game. Mega Man Xtreme contains three difficulty levels with Normal and Hard mode making up the game's main narrative and featuring only four of the eight main bosses in each, while Xtreme mode acts as a bonus scenario with all eight bosses available to fight from the beginning. 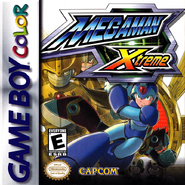 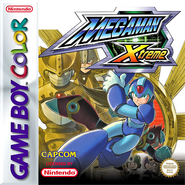