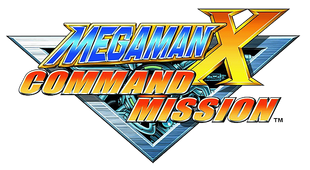 Mega Man X: Command Mission, known as Rockman X Command Mission (ロックマン, Rokkuman Ekkusu Komando Misshon?) in Japan, is a 2004 spin-off game in the Mega Man X series, released for the PlayStation 2 and the Nintendo GameCube consoles. It differs from the mainline X games in that it is a turn-based, role-playing game rather than a side-scrolling action platformer game. The story seems to take place somewhere between Mega Man X8 and Mega Man Zero. Four new characters were introduced in this game: Spider, Massimo, Marino, and Cinnamon join the trio of X, Zero, and Axl.

Artwork and illustrations were done by Ryuji Higurashi.

The game itself sees a departure from the main Mega Man X series, abandoning many of the old conventions: the side-scrolling action, classic art style, choice of which Maverick boss to fight (aside from a brief portion of the final chapter) and the appearance of Sigma. Instead, the game is set in a completely three-dimensional world, everything is cel-shaded, the path to the end is somewhat linear and Epsilon, an intimidating-looking tank of a Reploid, is the new villain.

In 22XX AD, a new substance known as Force Metal was extracted from the debris of a small meteorite. Technology based on the metal revolutionized the field of Reploid Engineering.

Giga City, an artificial island in the middle of an ocean, was built purposely for the mining and smelting of Force Metal. Everything seemed to go well, until a band of Reploids armed themselves and launched a rebellion on the island. Its leader, Epsilon, was branded a Maverick by the Government, who dispatched a Maverick Hunter team to Giga City to liberate Giga City from his grasp.

As X and Zero travel to the ruins, a collapsed pillar separates them. X must then fight his way to a place where he and Zero are reunited. Upon reaching Epsilon's destination, Shadow betrays the team, Epsilon's Cadre appears and knocks Zero away. X has no choice but to escape, and gather a resistance team to assist in defeating the minions of the Liberation army.

Ninetails
Add a photo to this gallery