Mega Man X8 (Rockman X8 in Japan) is the tenth and seemingly final installment in the Mega Man X series, released for the PlayStation 2 in 2004. The game was later ported to the PC in South Korea and Europe, and was the only game in the series not to be available in Japan first.

It is the year 21XX. The Reploid rebellions across the past years continue, seemingly with no possible solution despite the Maverick Hunters' best efforts.

Seeing this as a completely unnecessary worry, mankind has begun the next generation of research and development by constructing an orbital elevator able to take equipment and handwork to the moon where they seek to expand their horizons to space. This operation is labeled as "Jakob Project", with the orbital elevator bearing its name.

As another part of the project, a highly advanced new generation of Reploids is dispatched to the moon surface in order to work on the plans of the project. Everything seems to be running smoothly until one of the personnel transport carts explodes off the spiral track of the elevator and crashes down near the elevator site.

X, who was tracking around the area, is the first to arrive. After requesting a rescue squad, a rising figure from the debris draws his attention. As the many bog bodies come out of the fire, X's face changes into one of deep shock and fear. A vision of a nightmare appears in front of his very own eyes: an army of Sigmas climbing out of the crimson fire.

A single young Reploid who was being protected by the Sigmas is revealed, as he explains the situation. The Sigmas within the transport are really some of the New Generation Reploids, able to use DNA data to change their shapes. They are the perfect workers because they can change their shape according to a task. Claiming that their new systems makes them immune to all viruses, X relaxes as he asks the identity of the young Reploid. He introduces himself as Lumine, the director in charge of the Orbital Elevator, and the Jakob Project itself.

A few hours after the crash, a Maverick riot near the elevator site in the Galapagos calls for X, Axl, and Zero in order to stop a unique crab-like Mechaniloid. They manage to defeat it, but are then interrupted by a hail of missiles from Vile, who has apparently been resurrected from his earlier defeat in Mega Man X3. Vile has kidnapped Lumine for unknown reasons, and it becomes the Maverick Hunters' mission to rescue him.

However, what the Hunters do not know is that Sigma has returned once again, this time with his most ambitious plot yet. In Mega Man X7, it was revealed that Axl is the first of his kind, a prototype next-generation Reploid that has the ability to copy other reploids' DNA via a copy chip. In addition, these new Reploids have subroutines built in to prevent them from going Maverick. In X8, these next-generation robots have begun rolling off the assembly lines to work on the Jakob Project because they can copy strong Reploids, presumably at a lower cost than building the stronger Reploid itself.

Sigma's plan is simple. Contained on every single copy chip in these robots is Sigma's own DNA, meaning that the next-generation 'Maverick-Proof' reploids are in fact able to go Maverick at will. He seeks to scorch Earth to remove the "old generation" and repopulate it with his "children," a much more efficient method of domination than his previous attempts. What he did not count on was Lumine. When Sigma is defeated in his palace, Lumine steps in to take the entire operation over and kill the Maverick Hunters (it can be assumed he would have eventually tried this without the Maverick Hunters anyway). Lumine gloats to the Hunters that, in order for evolution to take its course, he and his fellow new-generation Reploids must destroy all that remains of the old world, both humans and "obsolete" Reploids alike. After a massive struggle, Lumine is defeated. When Axl walks up to Lumine's empty shell of a body, however, he is shocked as a tentacle springs from it and damages the crystal on his head.

As the three different characters ride back down the Jakob Elevator, Zero wonders if he no longer has to fight now that Sigma is dead for good, while X ponders Lumine's words on evolution. Axl is borderline conscious, but his shattered crystal can be seen glowing eerily with a tiny fragment of a mysterious purple crystal shard. 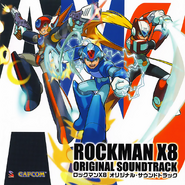