Mega Man X7, known as Rockman X7 (ロックマンX7?) in Japan, is an action platformer game developed by Capcom for the PlayStation 2 console. It is the seventh main game in the Mega Man X series and the first in the series to appear on the sixth generation of gaming consoles. Mega Man X7 was first released in Japan on July 17, 2003, with North American and European releases following in October 2003 and March 2004 respectively. It was also released for Microsoft Windows exclusively in South Korea until the re-release as part of Mega Man X Legacy Collection 2 (Rockman X Anniversary Collection 2 in Japan) in July 24 2018 for the worldwide release and July 26, 2018 for Japan,[1][2] whose Windows version was released internationally via Steam along with PlayStation 4, Xbox One and Nintendo Switch.

Mega Man X7 takes place in the 22nd century. Daily human life is often disrupted by "Maverick" crime from the "Reploids" robots that live and work among them. The heroic "Maverick Hunter" X has retired from the battlefield. As such, various groups have begun springing up to stamp out the ever constant threat of Maverick activity. Axl, a member of "Red Alert", questions his group's methods and escapes, only to be pursued by its leader, Red. Like other games in the series, Mega Man X7 is an action-platform game in which the player fights through an octet of selectable stages. The game is the first entry in the Mega Man X series to feature fully 3D graphics, and its also intermixed with both 3D and 2D gameplay.

The development of Mega Man X7 involved a challenging transition of the well-known Mega Man X characters into 3D. However, the reinvention of the series in both graphical and gameplay respects was met with a hostile critical reception. Reviewers found the game's foray into the third dimension well-intended but poorly executed.

Mega Man X7 is the first and only game in the series to have 3D gameplay in addition to the standard 2D style. When starting the game, the player has only access to returning Maverick Hunter Zero and newcomer Axl. The player can send the two characters to the same stage and both can be changed whenever the player needs to. In order to unlock X, the player must rescue 64 reploids (out of a possible total of 128) or defeat the eight main bosses in order to unlock him. Unlike the prequel, chips must be used immediately after they are gained and cannot be deactivated, nor changed from one playable character to another. Once all the chips for that playable character are completely maxed out, that particular character can no longer receive anymore chip upgrades.

While Zero and X retain their common weaponry, Axl has a new ability called "Copy Shot". If the player destroys certain types of enemies with said technique, they will leave an item upon their destruction. If the item (a glowing red sphere) is picked up, Axl will transform into a copy of the enemy he destroyed, with all of its features (speed, weapon, etc.).

After completing the game and saving it, players have the option to start a new game from loading that particular save file. This allows for X to become available after the opening stage and all the chip upgrades from the previous game are retained.

The plot of Mega Man X7 takes place in the 22nd century, during an age when humans coexist with humanoid robots called "Reploids". As some Reploids participate in violent and destructive crime, a police organization called the "Maverick Hunters" has been established to stamp out this activity. Maverick crime is rising in newly constructed cities. As this new crime wave hits, X retires, tired from the never-ending battles. A new group of vigilantes, Red Alert, is introduced. One of their members, Axl, decides he has had enough of their "murdering" and tries to leave the group. Red, the group's leader, is angered by Axl deserting, and goes on a rampage to get Axl back.

Axl is chased by a mechaniloid sent by Red Alert to retrieve him, and their chase causes havoc that calls for the Maverick Hunter, Zero, to investigate the area. After a quick meeting and battle against the mechaniloid, Zero takes Axl into custody at Hunter HQ. In response, Red issues a challenge to the Hunters: he will release some Mavericks that Red Alert has in captivity, and whichever group can defeat the Mavericks first will gain custody of Axl. Zero goes into the action without hesitation, and Axl's remorse for what he has done fuels his desire to become a Maverick Hunter. X stays behind, trying to find a more peaceful solution to what he views as another pointless conflict. Eventually, X decides that his involvement is required to assure a quick end to the bloody war. Alia then finds out the location of Red Alert main base. The hunters enter the Crimson Palace, defeating Red and finding a rebuilt Sigma, who has been behind Red Alert's corruption. Sigma is eventually defeated and X refuses to promote Axl to become an official Maverick Hunter, thinking he is not "mature" enough to become a hunter and thinking Axl might make the same mistakes he made as a Maverick Hunter, despite Signas and Alia heavily implying he should promote Axl as one. Meanwhile, Zero has a nightmare in which X gains a strange desire to destroy all Mavericks, (foreshadowing the rise of Copy X in Mega Man Zero).

Mega Man X7 was developed by a team of about 30 people, led by producers Tatsuya Minami and Tatsuya Kitabayashi of Capcom Production Studio 3.[3] This was the first game in the Mega Man series worked on by Kitabayashi. He explained that transitioning the character models of Mega Man X from 2D to 3D graphics was a challenge, but that including both 2D and 3D gameplay was not, as they had planned to have them in equal amounts for the game.[4] The development team took into account the less-than-favorable reception for Mega Man X6, but instead of simply trying to make the next game new and fresh with 3D graphics, they decided to focus on "getting 3D right".[4] The team also attempted to build upon the action-style gameplay for which the Mega Man franchise is known along with the more adult-themed storyline of the Mega Man X series. This involved adding the newer, non-traditional character Axl to deepen and better the narrative. Kitabayashi emphasized, "He's young, he's running away. He's like the new younger character of the group, and that's why I wanted to put him in there."[4] Minami stated in an interview that the game would feature multiplayer for up to two players.[3] However, the final version of the game lacks this option.

Prominent Mega Man artist and Capcom producer Keiji Inafune had little involvement in the Mega Man X series after the fifth installment. His only contribution to Mega Man X7 was lending advice to the illustrators on creating the new protagonist Axl. Inafune had been careful to make X and Zero unique when he originally designed them, and he wanted to give Axl the same treatment.[5] The game's primary artist, Tatsuya Yoshikawa, signed on when the project was well underway. He decided to take after his predecessor Haruki Suetsugu for the direction in which to design the characters.[5] Yoshikawa thought the team would have to create "polygon friendly" bosses, but decided to stick to the traditional design concepts set forth by the early Mega Man X games. As the series had finally transition into 3D, Yoshikawa also expected the team to rethink the way the game was made as they had done in the first Mega Man X title.[5] Inafune stated, "My personal opinion was that 3D is simply a graphical style, and just because a game is going 3D like X7 was, it doesn't mean we 'have to' make it a 3D game.[5]

The musical score for Mega Man X7 was composed by nine individuals. A 46-song soundtrack was released by Suleputer in Japan on October 1, 2003.[6] The game's opening theme, "Code Crush", is performed by Rina Aiuchi. The ending theme is "Lazy Mind", performed by Showtaro Morikubo, the voice actor for X in the Japanese games.[7] A CD single for each of the songs was released in Japan on July 20, 2003 and August 6, 2003 respectively.[8][9]

Mega Man X7 debuted on Japanese sales charts as the third best-selling video game at copies.[10] By its second week on sale, the game had sold 71,739 copies in the region and by its third week, 89,775 copies.[11][12] Media Create sales data lists the game as having sold 111,778 copies by the end of 2003 in Japan.[13] A budget re-release of the game was included alongside the PlayStation versions of the first six original Mega Man games as part of the Rockman Collection in Japan on December 19, 2003.[14]

Mega Man X7 received mixed to negative reviews. While it attracted some positive remarks for the character switching[15] and Reploid rescue systems,[16] the general consensus was that the game's mixture of 2D and 3D gameplay was well-intentioned but poorly executed.[17][15][16] IGN found the characters unbalanced as the shooters X and Axl felt far more useful than the melee fighter Zero.[15] In particular, critics commented that the camera and controls do not translate well from 2D to 3D.[17][15] Criticism has been aimed at the English voice actors' performance, to the point that it has been recommended to try listening to the original Japanese audio.[15][16][18] The music has been described as generic and, while appealing, it does not stand out against what previous installments have offered.[17][18]

GameSpy concluded "I can't fault Capcom or the MMX7 team for trying to reinvent a series that had obviously completely lost its way... [but] the flaccid 2D sections in this game aren't half as good as any of the levels in the original Mega Man X. The 3D bits are more compelling, but still substandard."[17] IGN instead placed the blame wholly on the 3D sections: "We can't help but think that Mega Man X7 would have been better-suited staying 2D. But until Capcom realizes that the better action-oriented 3D titles allow you to manipulate the camera whole-heartedly, future installments of the series will likely run into the same problems that this one did."[15]

In a retrospective article involving the franchise's worst games, 1UP.com included Mega Man X7 citing "usual 3D design issues" and the titular character requiring to be unlocked as the game's flaws.[19] GamesRadar compared it with the similarly poor received Castlevania for the Nintendo 64 due to how both games tried staying away from their predecessors' formula by adding 3D gameplay and the transition failed to gamers.[20] 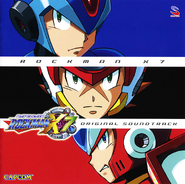