Mega Man X2 (ロックマンX2 , Rockman X2), produced by Tokuro Fujiwara, is the second game in the Mega Man X series of action platformer games and was released in 1994. It used the same graphics engine from the first installment of the series, but Capcom included an in-cartridge enhancement known as the Cx4 chip to improve semitransparencies and allow for some 3D graphics in the game. Mega Man X3 was the only other game to ever use this chip. Like the first game, it is praised for its soundtrack.

The subtitle Versus X-Hunters is given in the opening story; the Japanese version's full name is Rockman X2: Versus Counter-Hunters.

The game was re-released on January 10, 2006 as part of the Mega Man X Collection for the GameCube and PlayStation 2.

Six months after defeating Sigma, X assumes leadership of the Maverick Hunters. Despite Sigma's death, the Maverick Rebellion continues. X has tracked the remaining Mavericks to a Reploid factory, and launches a full assault. But this was not the end of the war.

Three of the Maverick leaders, Serges, Agile and Violen, form a group called the "X-Hunters" and gain control of the North Pole. In the time between Sigma's demise and their sudden uprising, Serges has collected the parts of Zero, who had died in the first conflict (in the Japanese version however, it is stated that Serges didn't salvage Zero's parts but created new ones, but still lacks Zero's original Control Chip). The X-Hunters contact the Maverick Hunters and taunt them with Zero's body, which they have split into three pieces, in order to lure out X, hoping to destroy him.

Unlike the series' previous entry, the game lacks a credits sequence for the game's staff, leaving it with just a "cast roll" for the game's characters, enemies and bosses. The next game in the series would follow this trend.

The official soundtrack release for Mega Man X through X6, however, revealed that Yuki Iwai (then known as Yuki Satomura) was the sole composer of the game's soundtrack.

Another credit source is the Remastered Tracks Rockman Zero album, where Inti Creates head composer Ippo Yamada lists this game among these he previously worked on, stating he did sound effects. Yamada has also done sound effect work on Mega Man 7 (credited) and three other SNES titles (all uncredited). 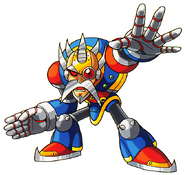 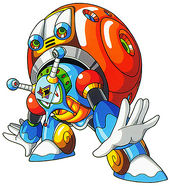 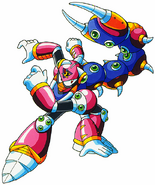 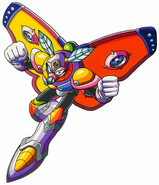