Mega Man X (ロックマンX, Rockman X in Japan) is an 2D action platformer game and the first game in the Mega Man X series, it introduced the series lead characters of X and Zero.

The game was released on the SNES first in 1994, then ported to the PC in 1995. It was produced by Tokuro Fujiwara, the director and producer of nearly all the early Mega Man Classic games. It was remade in 2006 as Mega Man Maverick Hunter X (Irregular Hunter X in Japan), for the PlayStation Portable. The game was re-released on January 10, 2006 as part of the Mega Man X Collection for the Nintendo GameCube and the PlayStation 2. In addition, the SNES PAL version of this game is published by Nintendo, instead of by Capcom.

A manga consisting of three volumes based on the original game was released in Japan.

The instruction manual for Mega Man X contains "The Journal of Dr. Cain", in which the story leading up to the events depicted in the game is narrated through excerpts of Dr. Cain's personal journal. According to the journal, Dr. Cain, an archaeologist searching in the year 21XX for fossil records relating to Mesozoic plant life, accidentally discovered the ruins of a robotics research facility that had once been operated by the legendary robot designer Dr. Thomas Light. Among the ruins, Dr. Cain found a large capsule which contained a highly advanced robot the likes of which the world had never seen before. This robot, X, had human-level intelligence and emotion. Fascinated by the genius of Dr. Light's design, Dr. Cain studied X and Dr. Light's few remaining notes. With X's help, some months later, the first "replicate android" or Reploid (in Japan, Repliroid), a robot who can think, feel, learn, and grow exactly like a human, was made. Within the year, the design had been standardized and Reploids were being mass-produced.

However, with the free will given to a Reploid came the possibility of criminal activity previously unknown to robots; such rogue Reploids were said to have "gone maverick", and were later referred to as Mavericks (in Japan, Irregulars). As the public outcry against the few Maverick incidents became too great to deny, the government stepped in, and under the advice of Dr. Cain, formed an elite military police organization called the Maverick Hunters. The Hunters would capture or disable any Reploids that posed a danger to humans, provide damage control at Maverick uprisings, help with disaster recovery, and perform other tasks as needed.

For the leader of the Maverick Hunters, Dr. Cain designed a very special Reploid, one with a very advanced thought system. This Reploid, thought to be immune to whatever defect of manufacture, design, or social conditioning caused Mavericks, was named Sigma. Sigma headed the Hunters for about three years before the very head of the Maverick Hunters himself became a Maverick, taking the vast majority of the other Hunters with him. Sigma seized control of a small island and drove all human occupants out. Claiming that the humans were "inferior" and that they were limiting the growth and potential of Reploids, he called for his followers to begin a massive extinction effort. It seemed, with only one remaining Hunter able to fight (the mysterious Zero of Unit 17), that all would be lost and human extinction would become inevitable. But X, guilt-ridden at having helped design such a ruthless and warlike race, decided to join forces with Zero and attempt to stop Sigma at any cost.

Mega Man Maverick Hunter X (Irregular Hunter X in Japan) is a 2006 enhanced remake of Mega Man X made for the Playstation Portable. It features updated graphics, 3D rendering, boss dialogue, FMVs for some story segments, and an entirely new gameplay mode where Vile is playable.

The biggest change, though, is the ability to play as Vile. Vile doesn't gain weapons in the same fashion as X; rather, he equips them to different parts of his body. He has arm weapons that can fire vulcans, missiles, or rocket punch attacks, a shoulder cannon that can fire energy beams, energy bursts, or ricocheting boomerangs, and a leg cannon which can fire napalms, energy balls, or flamethrower weapons. These weapons are controlled by a cost meter; the player cannot give Vile weapons for which he doesn't have allowable resources, and when they are used, the meter drains, but refills over time. Vile is also more sluggish than X, and the stage layouts are slightly different (some differ in terrain, while all differ in enemy placement). 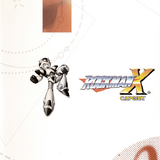 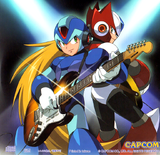