The two versions' names are called Black Ace and Red Joker. Both were released on the 13th of November, 2008 in Japan.

The core gameplay of MegaMan Star Force 3 is very similar to its predecessors. The player controls Geo Stelar, a fifth-grade boy who is able to perform an electromagnetic wave change with his AM-ian partner Omega-Xis to transform into Mega Man, an entity able to traverse in both the real and wave worlds. Field gameplay takes place on isometric maps where Geo can interact with his environment and other NPCs. In his human form, he is only able to travel in the physical world, restricted to seeing the wave world through his Visualizer (a special type of eyeglasses). However, by transforming into Mega Man, he can traverse both the real world and wave world. Unlike the previous two games, the player can transform into Mega Man at any time they wish.

Replacing the character's fictional handheld device from the previous game is the Hunter-VG, a sort of personal digital assistant where players can access their Battle Cards, status, emails, and various other features. Hunter-VG's also house artificial intelligent EM wave beings known as Wizards (the spiritual successors to the Net Navis of Mega Man Battle Network). Omega-Xis takes the form of Geo's Wizard.

The Hunter-VG affects gameplay with various pop-up messages that the player has to physically touch on the bottom screen in order to access. For example, when conversing with NPCs, the player can access personal information about them and their Wizards, or by selecting "ACCESS," the player can travel inside of "Cyber Cores" within various electronic devices. Key terms such as locations and characters are also stored to give casual players background if they didn't play the previous two games.

By utilizing the bottom screen in this manner, the game helps simulate that the player is actually operating a real Hunter-VG and interacting with a real Wizard. Occasionally, the player is also given a different Wizard temporarily with unique abilities that can affect their environment. 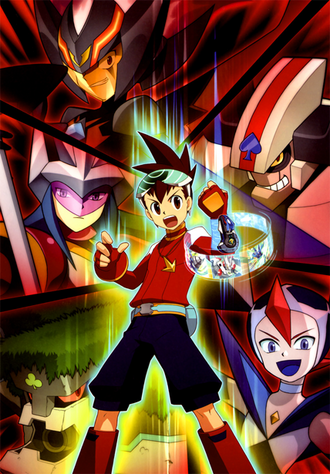 Above the real world are a series of roads comprised of radio waves. By transforming into Mega Man, Geo can run across the wave road where viruses can be battled via random encounters. The game then shifts to a three-dimensional grid, viewed from behind Mega Man. Mega Man is only able to move left or right while his enemies have a wider range of movement in front of him. However, Mega Man is given the ability to shield and temporarily jump into the enemies' side of the battlefield to compensate. HP represents the amount of life Mega Man has. Whenever he is hit by an attack the number decreases, and when it reaches "zero," the game is over. HP can be recovered in a number of ways, both in and out of battle.

The player can always use their standard Mega Buster at any time to combat with, and upgrade items for Omega-Xis can be collected throughout the game to increase the Mega Buster's rate, power, and charge speed. The Mega Buster is constantly charging to release a single powerful shot, but the player can hold the button down to fire rapidly.

However, the Mega Buster is fairly weak. Instead, combat revolves around Battle Cards, a library of trading cards that gives MegaMan a variety of unique abilities. Only a certain amount of Battle Cards can be placed in the player's folder at a time, and 6 cards appear randomly every time the player pulls up the Custom Screen. Although cards normally can only be used once per battle, they are all refreshed afterward, so the player is encouraged to use them as the primary means of combat. How many cards can be selected in a hand depends on their placement on the screen and their color.

Battle Cards come in a wide variety such as attack-type, defense-type, cards that enhance other cards, or "dimming" cards. There are three different classes of cards ranked by their power and rarity, and only a certain number of cards from each class, or a certain number of a specific card, can be placed into a folder.

A new feature in Star Force 3 is the placement of cards on the Custom Screen. Occasionally, cards will appear behind others and cannot be selected normally. By selecting these darkened cards, the player can choose to either use that card by itself without the option of pairing with others, or select an alternate use dictated by the element of the card. When selected in this manner, they can be paired with any card, regardless of placement.

The primary new battle feature in Star Force 3 is the introduction of "Noise" later in the game. Depending on how the player defeats enemies, a Noise percentage will increase; the higher the percentage, the more abilities become available to Mega Man. For example, exceeding 50% will allow Mega Man to access the power of one of 10 unique transformations based on FM-ian foes from previous games. These forms give Mega Man new charged Mega Buster shots, elemental armor, unique super-attacks (activated by successfully countering an enemy attack), and other special attributes.

The player is also given other special rewards for maintaining a high Noise rating, such as completely random Battle Cards at the end of the battle, and by achieving a particularly high Noise rating, access to the Meteor Server is granted. This option becomes available on the Custom Screen, giving Mega Man an exceptionally powerful folder to use for the next few rounds of the battle, as well as transforming into a unique Finalized form stronger than any other Noise forms.

Noise is increased in one of two ways. Against viruses, by defeating them with a non-elemental, non-dimming card that exceeds the remaining HP of the viruses, the "overkill" amount of the attack will contribute to the Noise rating. However, against boss characters, half the attack power of a non-elemental and non-dimming card will contribute to the Noise rating, allowing for much more frantic boss battles thanks to the benefits of Noise.

Like the previous game, Mega Man Star Force 3 is available in two different retail versions: Black Ace and Red Joker. The storyline and events are identical between the two games, and it is not necessary to play through both for the full experience. However, specific Battle Cards and transformations are unique between each version, specifically the Finalized forms of Black Ace and Red Joker (as displayed on the box of each version).

Each version has five specific Noise forms that are more easily gained than the other version. For example, you have a 15% chance of getting Gemini noise in Black Ace, but only a 3% chance in Red Joker. Likewise, you have a 15% chance of getting Crown noise in Red Joker, but only 3% in Black Ace. However, players are able to use the Nintendo Wi-Fi Connection to become "Brothers" with other players. By doing this, they can perform Multi-noise transformations by combining the player's Noise form with one of their Brothers', creating 100 unique combinations of abilities. The player can also be rewarded by not having any real-world Brothers by being given Rogue Noise, a special transformation that draws power from loneliness. Rogue noise has a 14% chance of being achieved in both games.

The game also offers a complex portrait-creation process for one's Brother Band mug-shot similar to the decal creation in Mario Kart DS, and a censorship filter is also implemented when creating profile information. Returning from Star Force 2, the player is also able to battle with other players through use of Wi-Fi.

Wave Command Cards from Star Force 2 also make a return in the form of White Cards that are distributed on Capcom's official website. These are physical cards that are printed out and laid atop the bottom screen. The player then taps a sequence of codes indicated on the card to activate them. When activated, the White Cards grant the player a set of 6 unique Battle Cards in addition to the 30 already placed in their Folder.

In Japan, the same type of cards were also available as Noise Kaizou and Rezon Cards, which could alter special attributes about MegaMan; however according to former Capcom-Unity representative Seth Killian, these cards are not going to be distributed in North America due to licensing issues. Despite this however, the official website was updated on July 15 to display Noise Cards and Purpose Cards alongside White Cards, insinuating they may be released in the near future.

Various Cipher Codes are also scattered throughout the game and distributed on Capcom's official website. When entered, the player is rewarded with various special items such as rare Battle Cards and ability programs.

Additional content became available via the Wii's Nintendo Channel and DS Download Stations at select retailers in mid-July, starting with the release of the Mega card "Acid Arrest" on July 13, and the Giga card "Crimson Meteor" soon after.

With the onset of Wizards, humans find themselves at a surprising new level of convenience. However, after further research, scientists have made a startling discovery that Wizards are emitting an abnormally large amount of Noise waves that are causing disruption in the wave world. To make matters worse, some Wizards have lost control and gone on rampages due to overexposure to Noise.

A crime syndicate known as Dealer begins manipulating and collecting the Noise for their leader named Mr. King, who poses as a charitable businessman for the public eye. Dealer has a playing card motif and uses Noise cards to transform Wizards into powerful EM beings in order to heighten surrounding Noise levels. (For example, a Wizard known as Magnes is given the Spade card to transform into the vicious Spade Magnes.) Dealer's true intentions involve manipulating a powerful mass of Noise called Meteor G that is on a crash-course for Earth, and using it to take the world hostage.

Geo Stelar and Omega-Xis find themselves in the middle of various Dealer attacks and begin thwarting their plans as MegaMan. A young Satella Police member named A.C. Eos takes notice and decides to enlist Geo as a commando in the fight against Dealer, especially since MegaMan is able to utilize Noise positively. Geo's friends Bud Bison (with his Wizard Taurus) and teen pop sensation Sonia Strumm (with her Wizard Harp Note) also join in the struggle against Dealer. Solo, a main antagonist from Star Force 2, also makes a return, this time battling against Dealer for personal reasons, in which Dealer is abusing and misusing the power of the lost continent of Mu. 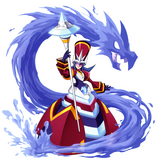 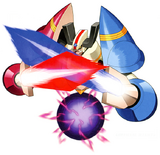 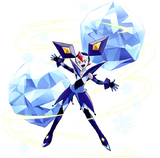 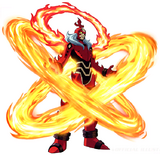 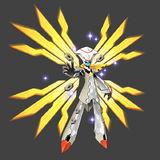 Sirius
Add a photo to this gallery 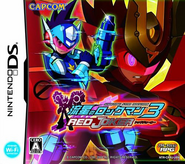 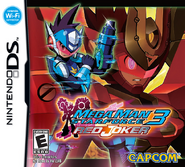 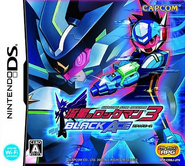 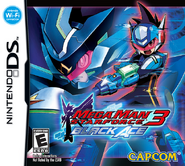 Official Complete Guide
Add a photo to this gallery