Mega Man Star Force 2 (Shooting Star Rockman 2 in Japan) is the second game in the MegaMan Star Force series. In a similar format to Mega Man Battle Network 5, each game card contains two versions of the game, available as Zerker × Ninja and Zerker × Saurian. They were first released in 2007.

The game circles around the lost civilization of Mu, and with it appears the three lost Tribe. By utilizing the OOPArt left behind by the Tribe, MegaMan can use the ability of the respective Tribe. This power is known as "Tribe On":

The transformations can be combined by choosing a Brother Card of a different Tribe during battle, calling Double Tribe:

(Introduction from the Game Manual)

It's been two months since MegaMan's battle with the FM-ians...

Geo Stelar no longer uses, a Transer, and has now upgraded to the Star Carrier, a new type of mobile terminal. Geo is excited about trying it out, and it is at that point that his cohorts in adventure - Luna, Bud, and Zack - drop in on him.

Prez tells everyone they should make a trip to see the sights and sounds of IFL Tower in Wilshire Hills. As Electopia's largest city, it is the center of all that is cool and cutting edge. The group is excited at just the thought of going there.

But while Geo and his friends are enjoying their time in Wilshire Hils, something terrible and unexpected occurs...A mysterious man appears and throws the denizens of Wilshire Hills into a panic when he unleashes a horde of viruses!

With the help of his partner in adventure, the alien Omega-Xis, Geo Wave Changes into the hero known as MegaMan! The battle with a new, terrible enemy is about to begin!"

General Auriga
Add a photo to this gallery 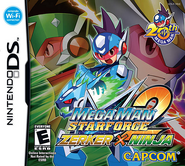 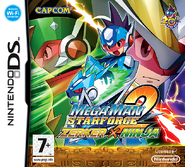 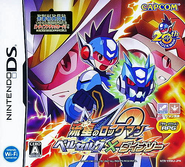 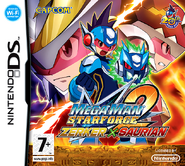 Zerker x Saurian Europe
Add a photo to this gallery