Mega Man Legends 2 (Rockman DASH 2 in Japan), produced by Keiji Inafune, is the third of four games in the Mega Man Legends series. First released in 2000, it saw a re-release in 2005 on the PlayStation Portable exclusively in Japan.

The events in the game take place one year after those of Mega Man Legends. It starts with MegaMan and Roll watching a press conference on the Flutter's television, which shows Prof. Barrell Caskett with his old friend/rival Von Bluecher, who is announcing that his new ship, the "Sulphur Bottom" will land on Forbidden Island. This feat has only happened with partial success a few times before, once when Barrell and Bluecher did it 30 years ago. They lost consciousness after landing, but not before seeing a mysterious girl. When they awoke, they were on a nearby island, where it is eternally winter. It is said that all of those who survive have seen this girl, but know nothing about her. This island is filled with mystery because it is surrounded by a seemingly impenetrable cloud. This cloud has swallowed up many ships and their passengers, who have tried in vain to land. It is rumored among the digger community, that the legendary Mother Lode is somewhere on this island.

As Von Bluecher is giving his speech to the press, we see the pirates The Bonnes amongst the crowd, with a few new faces, who are rival pirates of the Bonnes. Since the ending of the previous game, the Bonnes opened up a fashion store, which failed miserably (mostly because Tiesel only stocked the store with merchandise that he himself liked) and put them back into debt, which is why they are joining forces with other pirates to help them regain their vast wealth.

One of the reporters, in a very cryptic manner, starts asking Bluecher about the others who have disappeared on that island. She also states that the Mother Lode is not on that Island, but rather if one were to find it, a horrifying disaster would occur. When she is about finished, Barrell gets a look of shock on his face, and he shouts out a name... "Matilda". The same name as Roll's lost mother. After that, she breaks a window and jumps out of the ship, seemingly onto nothing. A few moments later, we see her flying away on a reaverbot-like machine.

Some time after this has occurred, Data accidentally sets the interior of the Flutter on fire (while trying to cook). While MegaMan does manage to put the fire out and keep the Flutter in working condition, the interior is so badly burned out that it would take a long time to rebuild. Rock and Roll put this aside for a more important task, to build a craft that could penetrate the clouds surrounding Forbidden Island. They plan to do this using blueprints left behind by Roll's parents, who seemingly disappeared years ago. They land on Calinca Island to carry out this plan...

Sera
Add a photo to this gallery 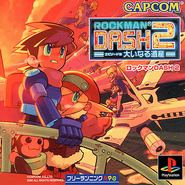 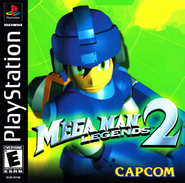 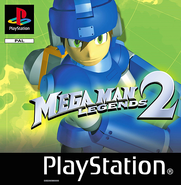