Mega Man II (Rockman World II in Japan), produced by Tokuro Fujiwara, is a game in the classic Mega Man series of action platformer games. It is the second game in the Rockman World games for the Game Boy.

After being defeated again, Dr. Wily learns of a top-secret government project that is creating an experimental time machine called the Time Skimmer in the Chronos Institute of Technology. He proceeds to steal it, and uses it to travel approximately 37,426 years in the future. There, he convinces his future counterpart to help him capture Mega Man's counterpart future counterpart, who at the time was turned back into a housekeeping robot. Then he reprograms Mega Man into Quint and gives him a robotic jackhammer, Sakugarne. Mega Man catches wind of his plan and goes after Wily, but is stopped by the last of his original batch of Wily Numbers (Metal Man, Air Man, Crash Man, Wood Man). Mega Man defeats them and heads into his fortress and defeats four of the second batch (Needle Man, Magnet Man, Hard Man, Top Man), and destroys them as well. Finally, Mega Man fights his evil future self. Despite his best efforts, Quint is defeated and is forced to teleport away, while at the same time, Mega Man gains Sakugarne as a weapon and uses it to defeat Wily once again.

Development of Mega Man II was outsourced by Capcom to Biox, a different company than the one that had worked on Mega Man: Dr. Wily's Revenge (i.e. Minakuchi Engineering). This is confirmed in an interview with Keiji Inafune in UDON Entertainment's Mega Man Official Complete Works, where he also states that the game's infamous reputation (regarding its design quality) stems from the developer's lack of knowledge pertaining to the series. The developer was dropped accordingly for the series' next title.

As with the rest of the classic Mega Man series titles released for Game Boy, the game lacks a credits sequence for the game's staff and instead offers a "cast roll" for the game's characters.

Aside from interviews with Capcom staff, there is only one known credit for the game: freelance sound designer Kenji Yamazaki. Yamazaki was only given a very short time to work on the game, and combined with his unfamiliarity with the series and having never worked on a Game Boy game before, led to what is generally considered an extremely poor soundtrack.[1] 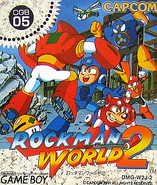 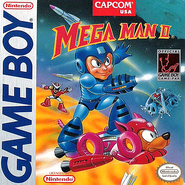