Mega Man Battle Network (Rockman EXE in Japan), is a role-playing game developed by Capcom for the Game Boy Advance (GBA) handheld console. It is the first title in the Mega Man Battle Network series, the fourth sub-series within the Mega Man franchise. Battle Network takes place in a alternate continuity of the original Mega Man series, set in a world where society and everyday life is driven by the Net (internet) which has become humanity's primary means of communication, commerce, and even crime as users are able to interact with and virtually explore nearly any electronic device using highly advanced, online avatars called "NetNavis". The story follows a young boy named Lan Hikari and his NetNavi MegaMan.EXE as they solve a series of crimes instigated by the "WWW (World Three)" organization.

Rather than share the platform gameplay of its predecessors, Battle Network is a tactical role-playing game (RPG) in which the player respectively controls Lan in the game's outside world and MegaMan.EXE in its virtual world. Battles take place in real-time; special abilities called "Battle Chips" can be accessed to fight off the numerous computer viruses present in the game's cyberspace environments.

The game was originally released in Japan as a GBA launch game on March 21, 2001 and was released later that year in North America and Europe. It was also released via the Wii U Virtual Console in Japan on July 9, 2014, in Europe on July 24, 2014, and in North America on July 31, 2014. The game was later remade and enhanced as Rockman.EXE Operate Shooting Star for the Nintendo DS in 2009, as of this writing only in Japan. Artwork and illustrations were done by Ryuji Higurashi.

Unlike the previous action-platformer entries of the Mega Man franchise, Mega Man Battle Network is a real-time tactical RPG. To progress through the game the player must alternately navigate the outside world as Lan Hikari and the Net as MegaMan.EXE, each containing certain tasks that must be completed to allow advancement in the other. Controlling Lan, the player may travel around the world map, interact with non-player characters, check email, purchase items, initiate Net missions, or speak with MegaMan.EXE through his PET. In contrast with traditional Mega Man entries in which battle and movement through the levels happen in the same setting, Battle Network's combat occurs only through by battling computer viruses within the Net. This cyber world is represented by a series of branching pathways and nodes, where MegaMan.EXE can travel to both new and previously visited locations, find and purchase items, and fight viruses. Battles do not generally appear on the field screen of the Net but are usually set as random encounters. The battlefield itself is made up of eighteen tiles divided into two groups of nine, one group being space in which MegaMan.EXE may freely move and the other group being space inhabited by enemies.

Akin to other Mega Man games, MegaMan.EXE possesses an arm cannon called the "Mega Buster". The player can transition among the nine provided tiles and fire the Mega Buster at enemies from across the screen. The objective of each battle is to delete all the viruses by reducing their hit points (HP) to zero. If MegaMan.EXE's own health depletes, a game over occurs. Certain power-up programs can be found that upgrade MegaMan.EXE's HP, defense, or Mega Buster power. The Mega Buster is quite weak on its own, so in order to delete viruses more efficiently, the player must access special abilities called "Battle Chips". These are minor programs that contain data that the Navi can utilize to perform more powerful attacks, summon other Navis for help, or execute supportive actions such as restoring HP or destroying tiles on the enemies' side of the battlefield. Battle Chips are uploaded to MegaMan.EXE by Lan's PET in a process called "Customization." Each turn in battle presents the player with five random chips from which to choose, though the player is limited to chips of the same variety or chips with the same alphabetic code. Once the "Battle Gauge" (or "Custom Gauge") at the top of the screen fills during battle, another random set of chips can be chosen from a general pool called the "folder". At any given time, the player may only have exactly thirty chips in the folder from which the Customization process may draw. The player is only allowed to carry up to ten of the same kind of chip and up to five Navi-summon chips in the folder. However, a player may possess any number of other chips in inactive reserve, called the "sack", which may be moved to the active folder outside of battle. Every chip and enemy is aligned to one of five elements: Neutral, Fire, Water, Electric, and Wood. If MegaMan.EXE hits an enemy with an attack aligned to an element they are weak against, the attack will do double damage.

Battle Network features a very limited multiplayer option. Up to two players may connect with each other using a Game Link Cable and then give or trade Battle Chips. Players may also engage in battles with one another. The "test battle" mode has no stakes whereas the "real battle" mode allows the winning player to take a battle chip from the loser.

Mega Man Battle Network is set in an alternate reality to the original Mega Man series, where computer and networking technology has advanced instead of robotics.

In an ambiguous year during the 21st century ("20XX AD"), human society and everyday life is driven by the Net, users are able to "jack in" to the Net and other computerized devices, and explore their various aspects using program avatars called "NetNavis (Network Navigators)" as if they were physical locations. The Net and the inner workings of computers are displayed as a virtual world with which computer programs of all varieties, as personified in a humanoid form, can interact. Users often do so by accessing their NetNavis via a "PET (PErsonal information Terminal)" device.

Lan is a fifth grader in the town of ACDC. His father, Dr. Yuichiro Hikari, is one of the world's top scientists and NetNavi researchers. Not long into the story, Lan and his NetNavi MegaMan.EXE, take it upon themselves to solve various criminal cases around ACDC involving other Navis and their operators. Some of the confrontations with the various criminals involve desperate, life-threatening situations including a bus rigged to explode, oxygen being cut off at a large party, the entire city's clean water freezing, and school students being re-educated as mindless slaves. The duo continuously crosses paths with Eugene Chaud, an official "NetBattler" commissioned by the government to investigate crimes on the Net. Chaud and his NetNavi ProtoMan.EXE act as rivals to Lan and MegaMan.EXE.

The protagonists eventually learn that the criminals are all connected to an organization called the "WWW (World Three)". The WWW intentionally infects computer networks with computer viruses so as to hinder their normal operations and hack vital information. The group is led by Dr. Wily, a former colleague of Lan's grandfather. While working together, Wily had specialized in robotics while Lan's grandfather specialized in networks, which eventually led to NetNavis. The government cut Wily's funding, opting instead to pursue Hikari's NetNavi project. Wily's goal throughout the game is to collect four super programs with which the "LifeVirus" may be constructed. The LifeVirus is a nearly indestructible virus capable of wiping out the Net and all associated devices. The protagonists infiltrate the WWW, but MegaMan.EXE becomes disabled. Chaud arrives and gives Lan a batch file from Dr. Hikari to restore his Navi. After receiving the file "Hub.bat", Lan questions his father about the name. It is revealed the MegaMan.EXE is actually a unique Navi made by Lan's father. When Lan's twin brother, Hub, died at a young age, Dr. Hikari transferred Hub's consciousness into the NetNavi MegaMan.EXE. This created a special physical and virtual bond between the two brothers. In the end, Lan and MegaMan.EXE manage to defeat Wily, destroy the LifeVirus, and restore peace to ACDC.

Autonomous NetNavis are NetNavis which operate independently with any programming or directives from humans.

Initially conceptualized with the intention of being a horror game,[1][2] Mega Man Battle Network was developed by Capcom Production Studio 2 amidst the success of Nintendo's portable RPG franchise Pokémon. Rather than extend upon the traditional action-platform formula for the Mega Man series as they had done with the 3D Mega Man Legends, Capcom followed Nintendo's example on the latter's then-newest handheld console, the Game Boy Advance. While creating Battle Network, director Masahiro Yasuma found difficulty in blending action attributes with "the kind of fun you get from a Pokémon game" in order to make it enjoyable, new, and fresh. Yasuma recalled that production was further challenged because no effective precursor of its type had been made before.[3]

The settning within Mega Man Battle Network was inspired by the technology of network. The development team wondered what concept a "modern Mega Man" game should be based on, as the classic games were about robots. Thats when they thought of the internet, which was quickly expanding at the time, as the answer. Another big influence were cellphone games.[2] Producer Keiji Inafune stated that the team wanted to add a "real world" feel to the Mega Man series by placing the protagonist of Battle Network in a location where the internet is prevalent. With the release of the portable GBA, the team felt that they should target modern gamers, specifically children, as an audience for the new series.[4][5] The developers thought such a theme would be both successful and relevant because these younger gamers grew up with and utilized such technology on a daily basis.[5][6]

Inafune credited himself for redesigning the protagonist Mega Man as MegaMan.EXE for the Battle Network series, though he recounted the character designers were reluctant to hand over the responsibility to him and even altered his illustrations afterwards.[9] The character's initial concept art went through a large number of changes before it was finalized to a much simpler design, so that even very young fans could easily draw it.[10][11] Yuji Ishihara acted as a primary character artist for the game. Each of the game's boss characters was designed so that their bodies would exude a certain motif; for example, StoneMan.EXE was meant to look like a huge castle made from stone masonry.[6] Some bosses resembled their original Mega Man series counterparts while others were a large departure from these more humanoid appearances. Ishihara explained that the artists chose size and shape variety among the characters to "provide a little bit of surprise and excitement" to fans familiar with their classic forms.[6] The musical score for Battle Network was composed by Akari Kaida, who would later work on the fifth installment of the series.[12] All 22 musical tracks for Mega Man Battle Network were included on the Rockman EXE 1 ~ 3 Game Music Collection, released in Japan by Suleputer on December 18, 2002.[13]

The Japanese version of Battle Network was first announced in August 2000 as one of four games set to be released for the recently unveiled GBA.[14] A demo of the game was promoted at Nintendo Space World that month, where it was displayed on only two out of the 140 playable consoles.[15] The game was displayed on five kiosks at the Tokyo Game Show the following month.[16] According to series planners Masakazu Eguchi and Masahiro Yasuma, this beta build of the game involved the player fighting a malevolent WoodMan.EXE within the school's electronic blackboard.[17][18]

Rockman.EXE Operate Shooting Star, an enhanced 2009 re-release of Mega Man Battle Network, features the original game plus some new features. This includes being able to play as Star Force Mega Man from the sub-series' sequel Mega Man Star Force, a new Navi called ClockMan.EXE, and competition in the Star Colosseum against Bass.EXE. It was only released in Japan.

Mega Man Battle Network received positive reviews from critics. Its unconventional combat system was given significant praise and its presentation was well-regarded. However, its storyline was met with mixed opinions. 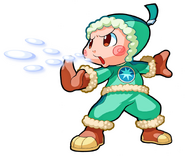 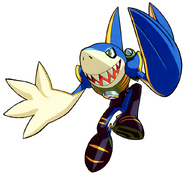 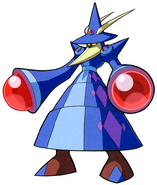 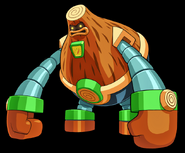 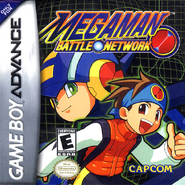 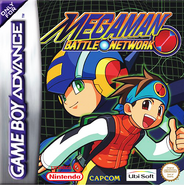 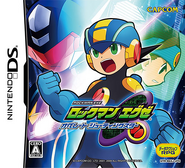