Gameplay in Mega Man 7 is mostly identical to the six previous games in the series. The player, as Mega Man, must complete a series of side-scrolling platform levels that typically end in a boss battle with a Robot Master. Destroying the Robot Master earns the player its special Master Weapon, which can be selected and used in all future stages. Each Robot Master is weak to a specific Master Weapon. Unlike the first six Mega Man games, only four new Robot Master stages (Freeze Man, Junk Man, Burst Man and Cloud Man) are selectable at a time. After beating them, access to the other four Robot Masters (Spring Man, Slash Man, Shade Man and Turbo Man) are unlocked.

Mega Man 7 uses many of the same conventions introduced in previous installments, such as sliding along the ground, being able to charge the Mega Buster for more powerful shots, and calling on the hero's dog Rush to perform various tasks. One unique feature is Rush Search, which causes Rush to dig up useful items wherever the player is standing. Certain stages contain the letters "R-U-S-H", which, when collected, will grant the player access to the "Rush Super Adaptor", a combination of the two enhancements introduced in Mega Man 6 with a powerful rocket-arm attack and jetpack for flying short distances. Defeated enemies found throughout each stage can give the player extra lives, items which refill health and weapon power, and special bolts. The player can visit "Eddie's Cybernetic Support Shop" from the stage select screen, which is run by Dr. Light's new lab assistant, Auto, and where these bolts can be spent on items and power-ups, a feature that originally debuted in the Game Boy Mega Man titles. The use of bolts and the purchase of items at a part shop would become a standard for the core titles starting with Mega Man 7. Other gameplay elements also exist, such as the player being able to obtain the robotic helper bird Beat and Proto Man's trademark shield. 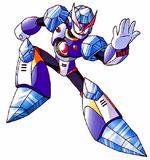 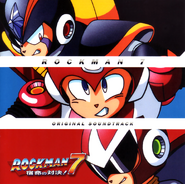