Mega Man 6, (ロックマン6 史上最大の戦い!! Rockman 6 Shijō Saidai no Tatakai!! in Japan), is the sixth main game in the classic Mega Man series of action platformer games. This 1993 game was released on the Nintendo Entertainment System and is also the last game in the series for the platform as well. It was produced by Tokuro Fujiwara. Mega Man 6 was notable in the series in that all of the Robot Masters were created by players - six from Japan and the other two (Wind Man and Knight Man) from the US and Canada respectively. The Robot Masters used in the game were the winning concepts of contests held in Japan and North America.

The game was published in North America by Nintendo, rather than Capcom, and it is because of this why the game never had an official European release. It was ported to the PlayStation 2 as part of the Mega Man Anniversary Collection. 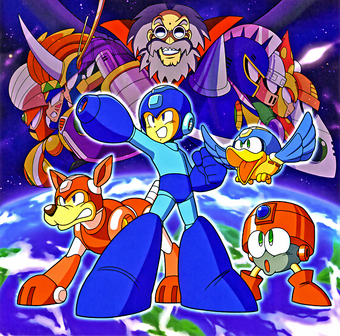 In the year 20XX, the first annual "Robot Masters Tournament" is held. The tournament was designed to test the designing capabilities of the world's greatest engineers. Thus, engineers and programmers (and of course, spectators) from the world over gathered to participate in this event. The tournament was hosted by a man known only as "Mr. X," who was one of the world's richest men and supposedly one of its greatest engineers.

Dr. Light, a pacifist, decided not to enter the tournament, but he took charge and did send Mega Man to go along and make sure that everything was safe for all the spectators and to discipline the Robot Masters. Many strong robots participated, and in the end, eight robots were victorious.

However, at the close of the tournament, Mr. X came to the podium and announced that he had reprogrammed the eight robots to do his bidding and that he had been manipulating the contestants all along. Furthermore, he was going to use his newly created army of robots, under command of the new Robot Masters to take over the world. Mega Man was immediately ordered by Dr. Light to put an end to the madness.

Dr. Light has upgraded Rush to be able to combine with Mega Man to form various adapters, such as "Jet Mega Man", who can fly/hover for a brief period of time, but can't use charge shots, and "Power Mega Man", who can punch huge blocks to destroy them, but has limited attack range.

Mega Man fought and defeated the tough Robot Masters, who were spread out all throughout the world, and then made his way to Mr. X's fortress. After battling his way through, he finally confronted the madman and defeated him. Mr. X removed his fake beard and revealed that he was none other than Dr. Wily. Wily had been posing as the multi-billionaire for an indeterminate amount of time, so it's safe to say that "Mr. X" either did not or no longer exists.

Wily fled to an all-new Skull Castle and Mega Man gave chase, fought his way through it, and defeated Dr. Wily in a final showdown. After the years of fighting, Dr. Wily was finally brought to justice and placed in prison with the proper authorities. As Wily can only, quote, "rule over a prison cell," the world is finally at peace...for now. 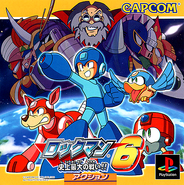 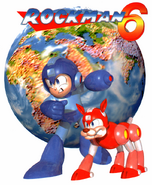