Mega Man: The Wily Wars, known as Rockman Mega World (ロックマンメガワールド Rokkuman Mega Wārudo?) in Japan, is an action platformer game compilation released for the Sega Mega Drive/Genesis. It consists of the three first games in Capcom's Mega Man franchise; Mega Man, Mega Man 2 and Mega Man 3. It contains a bonus game called "Wily Tower" that is unlocked once all three games are cleared. The Wily Wars was released in cartridge format in Japan and PAL regions. The North American Genesis version was available via the Sega Channel service or online.[1][2]

The premise of the compilation involves the evil Dr. Wily traveling back in time in an attempt to defeat the robotic hero Mega Man in one of their first three conflicts.[3][4] Each game follows Mega Man reliving his past adventures in which Wily dispatches a set of powerful robots to take over the world which must be single-handedly stopped as before. After completing his travels through time, Mega Man must use all that he's learned and tackle the Wily Tower.

After beating the three games, Wily Tower is unlocked. Dr. Wily has created three new robots specifically designed to destroy Mega Man and act as guardians of the tower: Buster Rod G, a monkey boss with an extendable pole weapon, Mega Water S, an amphibian boss who attacks with harpoon shots, and Hyper Storm H, a balloon-like boss who can inhale Mega Man over to him to damage him. These robots are known as the Genesis Unit, since the game was released for the Sega Genesis, and are patterned on characters from the Chinese novel, Journey to the West.

Players are given the option to pick up to eight out of the twenty-two weapons from Mega Man 1, 2, and 3, as well as up to three out of the seven transport items from those games. Wily Tower stages feature nearly all of the enemies from the first three games.

Artist Keiji Inafune claimed that the development of Mega Man: The Wily Wars was outsourced and rather slowgoing. He described the debugging procedure for The Wily Wars as "an absolute nightmare", even helping out in the process himself. "It was so bad," he recalled, "I found myself saying, 'I can't believe we've made it out of there alive.'"[3] Inafune based his designs of the three new Wily Tower bosses on characters from the ancient Chinese novel Journey to the West. Other than these characters, Inafune's only other illustrative contribution to the game was the depiction of Mega Man and Rush on the cover art.[3] The soundtrack of The Wily Wars consists of 16-bit versions of the original Mega Man musical scores, as well as new songs for the Wily Tower portion of the game. The composer for the Wily Wars has not been officially credited by Capcom. According to the game's sound effects creator Kouji Murata, Kinuyo Yamashita was responsible for the music composition and arrangement.[5]

Following the success of Street Fighter II′: Special Champion Edition on the Mega Drive/Genesis, rumors began circulating in the United States early 1994 that a Mega Man title was in the works for Sega's 16-bit system, the Sega Genesis.[6] The Wily Wars was displayed by Sega of America at the Sega Summit sales meeting in May of that same year.[7] The Wily Wars was first released in Japan on October 21, 1994.[3] It was the first Mega Man game to be released on a non-Nintendo console.[8] The United States magazine Game Players reported in its October issue that the North American release The Wily Wars was put on hold indefinitely due to graphical problems.[9] The April 1996 issue of GamePro reported that it had been cancelled.[10] However, the game was ultimately released in a non-cartridge format on the Sega Channel, a paid subscription service for Genesis games.[1]

Critical reception for Mega Man: The Wily Wars has been favorable. Christian Nutt and Justin Speer of GameSpot stated that the game is "a must for any serious Mega Man fan".[1] Sega-16 contributor Robert Menes summarized, "Although there's a few flaws that keep this from being an absolute must have, it's still Mega Man, and Mega Man games are among some of the best and brightest platformer series."[11] Jeremy Parrish of 1UP.com labeled Mega Man: The Wily Wars as "Not Worth It!" because certain design issues prevent it from aging as well as the NES versions of the games.[12] Mega Man: The Wily Wars has consistently ranked high among the editors of Nintendo Power as a game they would like to see on the Wii Virtual Console service.[13][14][15]

Elements of the game were adapted into the Archie Comics Mega Man series, with issue 20 notably including an opening that seemed to be leading into the game with the inclusion of the Genesis Unit and Mega Man Killers while issue 55 involves Dr. Light having a vision of the game's conflict. 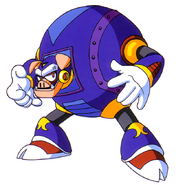 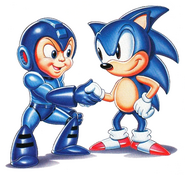 Official artwork of Mega Man and Sonic shaking hands.
Add a photo to this gallery