Mega Man: Dr. Wily's Revenge (Rockman World in Japan) is the fourth game in the Mega Man classic series of action platformer games. It is the first of the Mega Man World games for the Game Boy, and was released in 1991. The director of the original game Tokuro Fujiwara was producer. The game was later ported to the 3DS Virtual Console.

Mega Man: Dr. Wily's Revenge is an action-platformer that shares many similarities with its NES counterparts. The player, as Mega Man, is able to choose among four stages to complete in whatever order desired. Each stage contains various enemies to blast through and obstacles to overcome, such as leaping between disappearing blocks over deadly spikes and bottomless pits. Mega Man's primary weapon is an arm cannon that has unlimited ammunition. Destroyed enemies typically leave items that replenish Mega Man's health or extra lives. At the end of every stage is a boss battle with a robot master, and defeating it earns the player its special weapon. Each boss is weak to another's weapon, allowing the player to strategize the order in which they are beaten.

Dr. Wily's Revenge reuses and mixes stage components, enemies, and robot masters from the first two NES games in the Mega Man series. The initial four stages and bosses (Cut Man, Ice Man, Fire Man, and Elec Man) come from the original Mega Man game. A password system allows the player to return to the game after any or all of these first four stages are cleared or when the player suffers a game over. Once the player completes these stages and travels through Wily's fortress, four more robot masters must be fought in order to progress. These bosses (Quick Man, Bubble Man, Flash Man, and Heat Man) are taken from Mega Man 2 for NES. Although they do not have their own stages, the player earns the special weapons of these bosses. Once all four are defeated, the player faces a new robot master created for the game, Enker.

Dr. Wily has another new plan to take over the world, but he isn't creating new Robot Masters this time. He revives eight Robot Masters, in another attempt to see if they can defeat Mega Man. Four of them attack the city, while the other four protect his base. He also has decided to take his plan into another frontier: space! Dr. Wily has built a space station called the "Space Node", from which he intends to unleash his plan, to use the "Mega Man Killer" Enker, who can absorb Mega Man's shots with his special Mirror Buster lance.

Though this game does not feature a staff roll (as with the rest of the series), the Canadian copyright record[1] lists nine people involved with the game.

Based on their known roles, a proper staff roll would closely resemble the following: 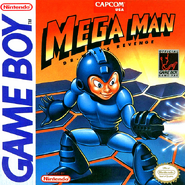 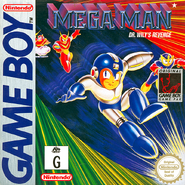