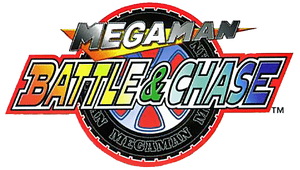 Mega Man Battle & Chase is a 3D racing game in which the players compete against one another or the computer AI in a series of road races. The game consists of three different modes: a single-player "Grand Prix Mode", a "Time Trial Mode", and a multiplayer "Versus Mode". The Grand Prix mode contains a total of eight race tracks, while the Time Trial mode contains twelve tracks.[2] The game has ten playable characters, each of them possesses an innate ability that can be used for attacking other drivers during the race. A gauge on the left side of the screen will repeatedly charge and allow for another special power when fired. For example, Mega Man has the ability to shoot small projectiles from his vehicle. When the weapon gauge completely fills, the player can unleash a much larger and more destructive blast.

All the race tracks are littered with hazards and other obstacles that range from street cones to giant, walking Mets. Rather than avoiding them, players are encouraged to make contact with them.[3] Running through or destroying ten of these hazards with a weapon will give the player a special item. These items have various effects such as giving the player a shield or disabling other drivers' weapons.[2] Winning races in the game's Grand Prix mode lets the player select a specific part (engine, wing, tire, or body) from the owner of the track, allowing for the customization of both the performance and appearance of the chosen character's vehicle.[2][3]

A new hit show has just been released, called "Battle and Chase". It is an extreme racing show, that pays off a large amount of money. Dr. Wily enters, and plans to steal the prize money for his own evil purposes. When word reaches Mega Man, he decides to enter and use the prize money to fix Dr. Light's computer. Soon, word reaches everyone and many others decide to enter for their own gain. It becomes a challenge where the stakes are high, and the reward is higher.

Series artist and producer Keiji Inafune claimed that he had always wanted to "[bring] the unique 'beat your enemies and take their stuff aspect' of Mega Man to a racing cart game".[4] The game's character designs and promotion images were illustrated by Shinsuke Komaki and Hideki Ishikawa. The concept art for Guts Man in his Wild Arms racer was redone for the overseas version due to the original piece containing the character performing an offensive gesture.[4] The musical score for Mega Man Battle & Chase was composed by Yoshinori Ono and has vocals by Yoshino Aoki and Ryoji Yamamoto. This was one of Aoki's first projects at Capcom. She sang theme for the character Roll, Kaze yo Tsutaete (風よ伝えて?, "Wind, Carry My Words"), which was used as both an ending theme and for the game's Japanese television commercial advertisement.[5] The second vocal ending theme A ~ Otoko Ichidai (あ~男一代?, lit. "Ah, Man's Life") features Yamamoto as the character Guts Man.[6] A CD soundtrack for the game was released by Victor Entertainment in Japan on June 21, 1997.[7]

Critical reception for Mega Man Battle & Chase has been mixed. The gameplay has been almost universally compared to Nintendo's Mario Kart series.[2][3] GameSpot contributor Jeff Gerstmann was impressed by the Japanese version of the game, noticing the good graphics and interesting sound design, and concluded that it is "one of the coolest Mega Man games released".[3] The Official UK PlayStation Magazine find the game to be "basically just a rip-off". When reviewing the Mega Man X Collection, Phil Theobald of GameSpy found the graphics for Mega Man Battle & Chase to be dated, but that it was still fun to play and that the ability of the player to steal opponents' parts to use as their own further tied the game to Mega Man franchise. IGN writer Jeremy Dunham similarly asserted that "[he] was actually surprised at how entertaining [the game] really is", and stated that while it was not on par with something like Crash Team Racing or the Mario Kart series, it was a nice change of pace with "some cool tracks".[12] In his retrospective of the entire Mega Man game franchise, Jeremy Parrish of 1UP.com denoted the Mega Man Battle & Chase as "a simpleminded racer that is mainly notable for being the first truly shameless Mario Kart clone and for almost being released in the U.S". He did not find the game worth a stand-alone purchase but stated that "it's tolerable as a few minutes' diversion as part of the Mega Man X Collection for PS2".[13]

Napalm Man in his Patriot Bomber

Spring Man in his Surprise Boxer 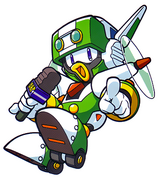 Ripot
Add a photo to this gallery 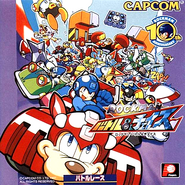 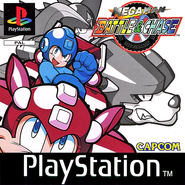 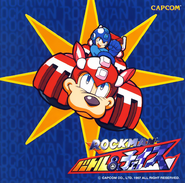 Japan Ad
Add a photo to this gallery