Maylu Sakurai is a character from the Mega Man Battle Network series. She is the NetOp (Operator) of Roll.EXE. Maylu is a friend of Lan Hikari's, and also his classmate.

Maylu is an optimistic and smart character, whose maturity often keeps the bull-headed Lan out of trouble. Throughout the series, she attempts to show Lan that she can protect him, just as he has protected her many times. However, it usually results in Lan saving her and Roll from danger. They have feelings for each other, but Lan doesn't admit it until the end of Mega Man Battle Network 6, where, in the epilogue, it is revealed that 20 years later, the two are married and have a son named Patch.

In the anime, Maylu has a more hot-headed personality, constantly scolding Lan for his immaturity. Despite this, her feelings for him became stronger as the series progressed. She is also shown to become very jealous whenever Lan is with another girl; examples include Princess Pride, who had developed a very strong, almost loving bond with Lan during her time in DenTech City, Shuko in Axess when she gets too closed to Lan and Jasmine in Stream who she viewed as a rival for Lan's affection.

In the anime, she and her NetNavi were shown to be quite a powerful fighting team, but not until much later in the series. Her first battle is with Mr. Match and TorchMan, which she won with the help of GutsMan.

When the N1 Grand Prix was held, she, along with Dex, Lan, and Tory, participated in the tournament. She battled Maddy in the first round and during the battle, Roll's ability to control viruses are shown to be able to control opponent's viruses too. She defeated Maddy and made it to the second round, where she dueled Tory and defeated him by using her NetNavi's power and her intelligence to counter all of IceMan's moves. Maylu continued on to the tag battle, where she was paired up with Lan to battle Mr. Match and Maddy. Prior to the battle, she had received a chip by Yahoot (disguised as Higsby) in an attempt to sabotage their match, but it almost seemed like a waste at first due to Lan's and Maylu's incredible combination power. The synergy between Lan, Maylu, MegaMan, and Roll proved to be a fierce combination, while Mr. Match's and Maddy's constant bickering disrupted their team, giving Lan and Maylu an early lead. The chip, called a Devil Chip, was then used in a desperate move when the match started to go sour for MegaMan and Roll, turning Roll into Empress Roll, making her turn on MegaMan. Only when the real Higsby, who was locked in a closet, appeared, he figured out the problem and the solution. All Maylu had to do was pop in another Chip, and the primary effects of the Devil Chip would be removed. Doing so allowed them to win the match. However, despite actually winning, Roll was too worn out to continue the tournament due to the Devil Chip's cost: it drains all of the NetNavi's power after use. After the N1 Grand Prix, Dr. Hikari gave her Rush as a pet. 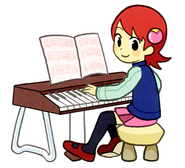 Rockman 20th Anniversary art
Add a photo to this gallery
Retrieved from "https://capcom.fandom.com/wiki/Maylu_Sakurai?oldid=132851"
Community content is available under CC-BY-SA unless otherwise noted.