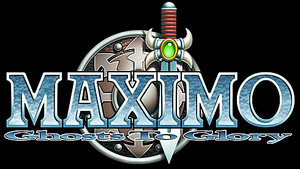 Maximo: Ghosts to Glory (マキシモ in Japan, also known as just simply Maximo in Europe) is a 3D hack and slash platform game released for the PlayStation 2 in 2001. The game is a spin-off in the Ghosts 'n Goblins franchise, and featured original designs of Japanese manga and Famitsu cover artist Susumu Matsushita. It was a part of the PlayStation 2 "Greatest Hits" line and was followed by a sequel, Maximo vs. Army of Zin. The game was praised for its style and flair, but heavily criticized for its punishing save system.

Maximo takes place in a dynamic, fully 3D world. The character can move freely by running, jumping, crouching, and performing other various motions. Gameplay revolves around defeating large numbers of enemies, which can be accomplished by attacking with a sword and shield, and using different combos and special moves. Like Arthur, Maximo fights wearing armor, but if he is hit, he will lose it and must continue fighting wearing only his boxer shorts. The ultimate object of the game is to rescue five damsels in distress. The first four sorceresses will bestow one of three gifts upon their rescue: armor, a chance to save the game, or a kiss. The player can pick only one of these gifts. If four kisses are collected before taking on King Achille and the rescue of Sophia, an art gallery is unlocked for viewing. The reason that "saving the game" is one of the gift options is that it would otherwise cost 100 Koins to accomplish this, and money is not easy to come by.

When the player runs out of lives, Grim allows Maximo to return from the dead at the cost of Death Koins. The price is one Death Koin the first time, but rises exponentially the more Grim is called upon (two Death Koins the second time, etc.). Death Koins are earned whenever 50 spirits are collected. This will satisfy Grim enough to give Maximo another Death Koin. However, spirits are even harder to find than regular Koins, which are needed to save the game or buy more armor. This is one of the biggest complaints against the game, with most people arguing that this brought the difficulty level up tremendously, rendering the game not nearly as enjoyable as it otherwise could have been.

Maximo, a brave knight, thinking he’d found a trustworthy assistant in the likes of Achille, decided to leave his apprentice behind and go out into the world. Achille turned out to be an evil super-villain, and now the land is in trouble. Four princesses have been captured, and the dastardly Achille has spread them across the world, stashing them away in four separate towers. To make matters even worse, Achille has taken Maximo’s main squeeze as a bride. The knight must now battle fierce creatures and explore dark lands, in the name of peace and love.

In 1999, Capcom introduced the Maximo manga to video games, in an attempt to merge the Ghosts 'n Goblins universe with Matsushita's work. The title was originally planned for the Nintendo 64, but was delayed for several years and transferred for the PlayStation 2. Maximo was presented in E3 2001, and released at the end of the same year in Japan and in early 2002 in the United States and Europe.

The concept was created by Capcom Digital Studio head David Siller who wanted to bring back "old school" game play. The game was produced by Mark Rogers and designed by David Siller, Bill Anderson and Scott Rogers. Jonathan Casco was the art director.

The artistic team placed special emphasis on the design and rendering of the characters, as well as putting a great deal of work into the environmental effects. The game's music, which varies from stage to stage, includes orchestrated remixes of the tracks found in Ghouls 'n Ghosts and Ghosts 'n Goblins, composed by Tommy Tallarico. 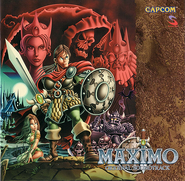 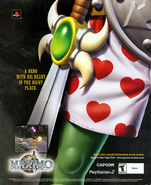