The wife of Toshiie Maeda, she's more responsible than her husband, but still loves him whole-heartedly. She is more harsh on her nephew Keiji Maeda than Toshiie, but this is because she feels he has more potential than he displays. Due to her characteristics, fans call her "the ideal housewife".

Matsu has a unique ability to summon animals (among other animals, she can call on wild boars, moles, hawks and a giant bear) and she wields a katana like Kenshin Uesugi, but in Sengoku BASARA 2, she wields a naginata. Her element is wind.

In Sengoku BASARA 2, Matsu's story revolves around finding various ingredients with which to cook a good meal for Toshiie and Keiji.

In Sengoku BASARA 3, despite being a non-playable character, Matsu is somewhat important to the story of the game. After being kidnapped by Yoshiaki Mogami, she is held hostage by him, which forces Toshiie to ally himself with the Eastern Army. The player can rescue her should they fight Mogami at Hasedo. Because she is held hostage, if the player is playing Keiji's blue path, Keiji is forced to make a decision over whether to continue to stay with Magoichi in the Western Army or to leave the woman that he loves. Should Keiji leave the Western Army, he will appeal to Yoshiaki for his aunt's safety and rescue her. Should he stay with Magoichi, Keiji and Toshiie will attack Ieyasu at Sekigahara while Magoichi rescues Matsu.

Maeda Matsu (前田 まつ, 1547 – 1617), known in Japan as o-Matsu no Kata (お松の方), was a Japanese woman of the 16th century. She was the wife of Maeda Toshiie, who founded the Kaga Domain. Matsu had a reputation for intelligence; she was skilled at both literary and martial arts. Her sons--Toshinaga, Toshimasa, Toshitsune, Toshitaka, and Toshitoyo, who were each born throughout Matsu's marriage to Toshiie--were each allowed their own individual title of daimyo and their own private fief. 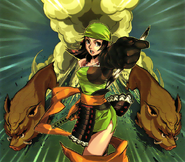 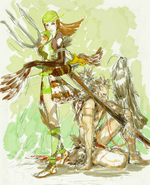 The Maeda clan (in background)
Add a photo to this gallery
Retrieved from "https://capcom.fandom.com/wiki/Matsu_Maeda?oldid=137867"
Community content is available under CC-BY-SA unless otherwise noted.