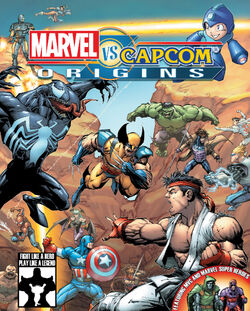 Marvel vs. Capcom Origins is a fighting game in the Marvel vs. Capcom series. It is a compilation of Marvel Super Heroes and Marvel vs. Capcom: Clash of Super Heroes featuring upgraded visuals, online play, challenges, and unlockables. The dual pack was jointly developed by Capcom and Iron Galaxy Studios, and released on the PlayStation Network and Xbox Live Arcade in September and October 2012.

Marvel vs. Capcom Origins is built upon a framework similar to Iron Galaxy Studios' previous title, Street Fighter III: Third Strike Online Edition. The game includes an arcade mode and a training mode, and high-definition visuals with multiple options available for filters, frames, and scan lines. In addition to ranked and player matches, the GGPO-enhanced online mode adds eight-player lobbies, spectator mode, and replay saving. The matchmaking system allows players to adjust certain settings to narrow down search results, such as establishing ping thresholds and regional preferences. Marvel vs. Capcom Origins also features in-game challenges which, upon completion, reward points that can be used to unlock bonus content from the "Vault", including concept art, videos, and secret characters.

Marvel vs. Capcom Origins was announced by Capcom on July 5, 2012. A playable demo of the game was present during the Evolution Championship Series from July 6–8, 2012, and San Diego Comic-Con International from July 12–15, 2012. According to producer Derek Neal, the developers used the original arcade ROMs from Marvel Super Heroes and Marvel vs. Capcom: Clash of Super Heroes to create the game. The balance of the characters was deliberately left unchanged in order to remain faithful to the arcade versions. During an interview at San Diego Comic-Con, Neal stated that Capcom had made several improvements to the online capabilities of their games since the release of Street Fighter III: Third Strike Online Edition in 2011 after taking fan feedback into consideration, focusing on the new options to filter matches by ping and region of play.

Marvel vs. Capcom Origins was released in North America and Europe on September 25 and 26, 2012. The European PlayStation 3 version was originally scheduled to be released alongside its Xbox 360 counterpart; however, an unspecified error delayed its release until October 10, 2012.