Mark is a Vietnam veteran working for a security company in Raccoon City. Even at more than 50 years old, his robust strength has not diminished. He has tasted the emptiness of war. Now, more than anything, he just wants to live in peace.

Mark is a very caring individual, who wants nothing more than to see his friends and family safe. More often than not, the other survivors could catch a faraway gleam in his eye as he wondered what became of his wife and children.

Well prepared for the horrors that await the ragtag group, Mark applies his indomitable spirit that was forged in the jungles of Vietnam to whatever task the survivors face. A brave but cautious man, Mark resents the carefree and reckless attitude exhibited by fellow survivor Kevin Ryman.

During the Outbreak, Mark wears his SCUTUM security service jacket, black pants and brown boots. He has two unlockable Alternate Outfits: "Casual Wear" from Outbreak, and "Colonel's Honor" from File 2. 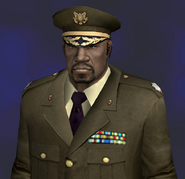 "Colonel's Honor" Alternate Outfit
Add a photo to this gallery
Retrieved from "https://capcom.fandom.com/wiki/Mark_Wilkins?oldid=132591"
Community content is available under CC-BY-SA unless otherwise noted.